[ The Korea Herald – Send E-mail ]
Get ready for total immersive K-pop
Play K-Pop offers music entertainment through new media technologies
By 박형기
Published : Nov 4, 2015 - 17:33
Updated : Nov 4, 2015 - 17:36
JUNGMUN, Jejudo Island -- In complete silence and inside a dark theater, light beams down from above and merges to form the image of K-pop singer G-Dragon. 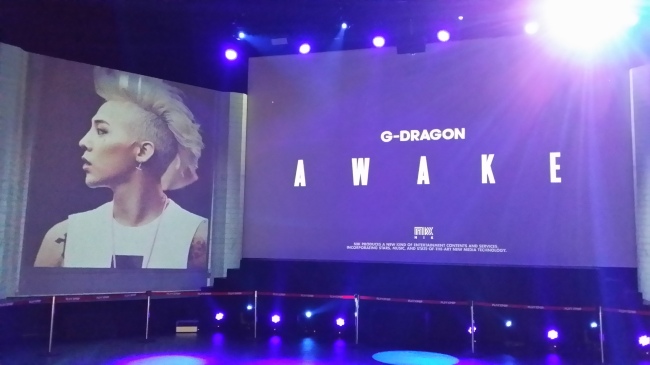 G-Dragon’s “Awake” hologram concert at Play K-Pop (Park Hyong-ki/The Korea Herald)
Then a concert begins, with the holographic G-Dragon singing, rapping and dancing his way through hits such as “Fantastic Baby.”

With large-screen displays on the side of the theater showing dynamic visual images of his dancers dancing to the rhythm, spectators may forget that the star performing in front of them is not real.

The live hologram concerts by K-pop stars such as Big Bang, Psy and 2NE1 are the top attraction at the Play K-Pop digital theme park in Jungmun Resort on Jejudo Island.

The three-story park takes visitors first to the second floor, where they can listen to K-pop music from the past via the Sound Tunnel. 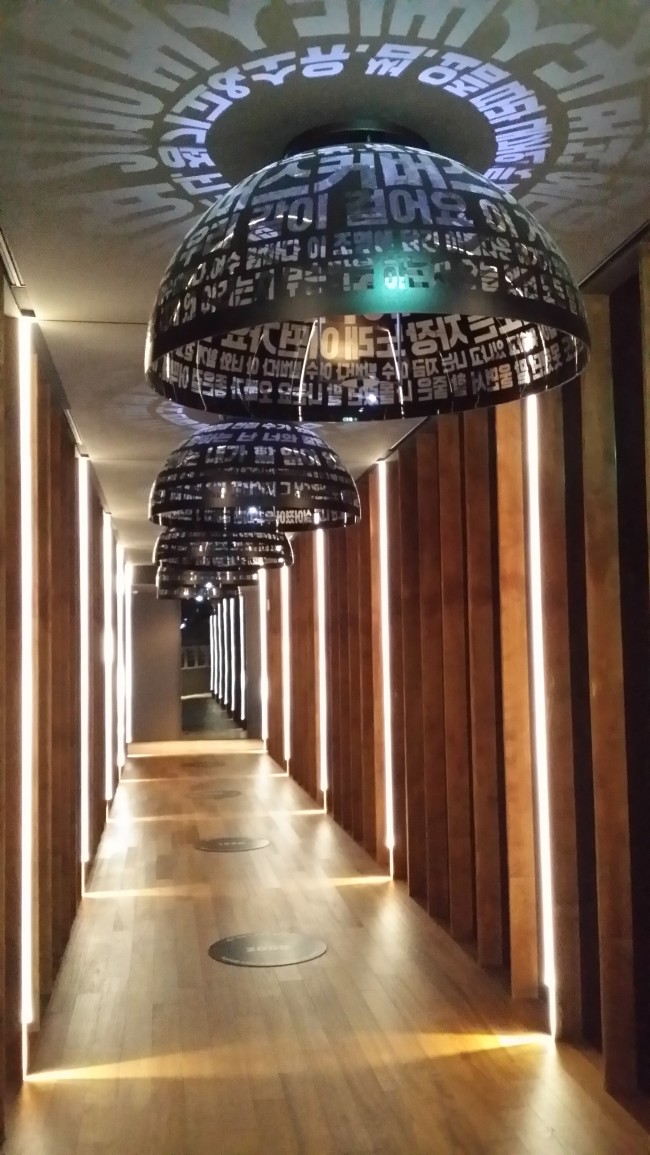 Visitors can listen to music from the past inside the Sound Tunnel. (Park Hyong-ki/The Korea Herald)
The tunnel has platforms corresponding to different time periods. By stepping on them, visitors can listen to popular songs from those years such as Sung Si-kyung’s “On the Street” from the 2000s and Seo Taiji and Boys’ “To You” from the 1990s.

The park also has a Hall of Fame and Music Library where visitors can learn K-pop history and hear the greatest hits of the past from stars like Cho Yong-pil and Joo Hyun-mi and modern songs from Kim Gun-mo and Jo Sung-mo.

When it is almost time for the Play K-Pop’s hologram concert, which is held every hour for 30 minutes between 9:30 a.m. and 6:30 p.m., its staff notify guests that the show will begin on the first floor.

The most interesting part of the concert is when spectators have the chance to dance with the holographic K-pop stars on stage. An audience member is guided to stand on a special stage during the show, and their holographic image appears on the main stage with the stars, who sing and dance for them.

On the third floor, there are special recording studios in which visitors can sing and record K-pop songs while interacting with and being trained by stars like Kim Bum-soo and Park Mi-kyung onscreen. Also, visitors will be able to dance with stars on a stage with a large-screen display on which they will appear dancing together.

The ticket to the digital theme park in Seogwipo costs 15,000 won for adults, 13,000 for teenagers and 12,000 won for younger children. Tickets are valid for three hours, enabling people to go outside and enjoy Jungmun’s oceanic landscape, and come back inside the digital music park in a single visit.