[ The Korea Herald – Send E-mail ]
Webtoons eye overseas markets
By 박형기
Published : Nov 4, 2015 - 15:03
Updated : Nov 4, 2015 - 16:36
Once considered “hazardous” to the young, comics in Korea are having their moment in the sun with webtoons, or web comics, hailed as holding the potential to become the country’s next driver of hallyu, or the Korean Wave.

“In the ’80s, comics were considered bad and were burnt. But now, they are being displayed at special exhibitions and events, representing Korea’s culture in the world,” Lee Chung-ho, president of the Korea Cartoonists Association, said at the 15th Cartoons Day event in Seoul on Tuesday. 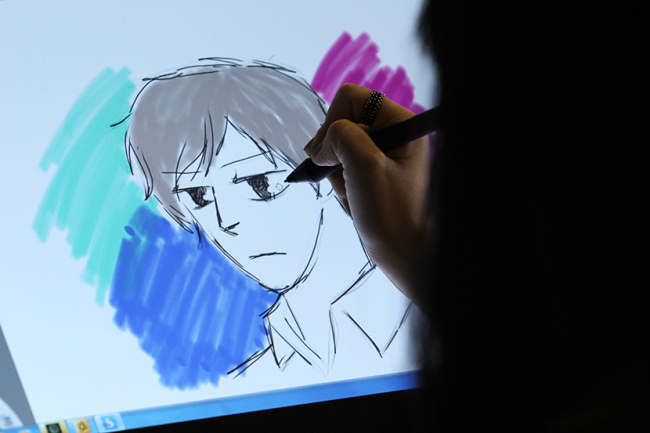 Participants draw webtoons at an event in Seoul. (National Library of Korea)
In the 1980s and ’90s, comics were considered “hazardous materials” that can spoil the young, and hinder their education and college goals.

The general population viewed a career in drawing comics as the lowest-grade job that could barely earn minimum wage. Korea then held outdoor events burning comic books to discourage the young from reading them.

The tide has now turned with the mass production and distribution of computers and mobile devices, increasing demand for visual content amid an upsurge in online traffic.

With artists and their work now being perceived as “creative economic assets” to the country’s growth, the value of Korea’s comics industry stands at around 760 billion won ($671 million), of which 170 billion comes from webtoons, according to the Ministry of Culture, Sports and Tourism.

Now, an established comic artist earns over 6 million won-7 million won per episode on average. In Korea, 1 in 3 reads webtoons every week.

The industry -- with some 4,600 artists and 30 webtoon platforms -- is gearing up to introduce its work in “blue ocean” markets, including the U.S.

With Korean webtoons being translated to other media such as movies and TV dramas, they can further offer many opportunities in boosting transmedia business.

“I believe webtoons have a lot to offer as ‘one-source multiuse’ content as they have strength and uniqueness in storytelling,” said Jay Im, chief strategy officer of Rolling Story.

“Overseas markets such as the U.S. where webtoons have not yet been fully explored could give the industry a new shot.” 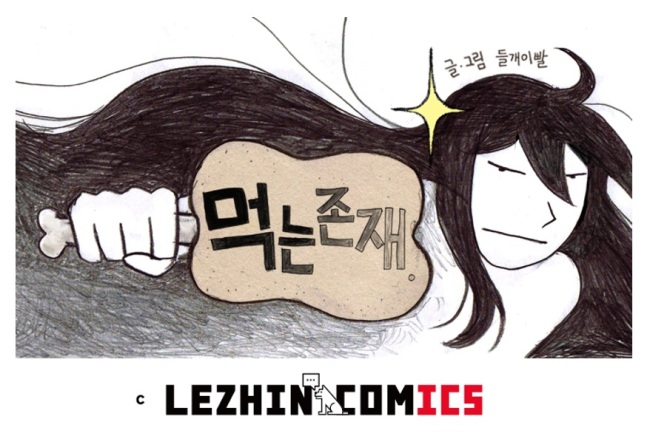 Lezhin’s hit webtoon “Eating Existence” will be made into a Web drama on Naver TV Cast, starring comedian Ahn Young-mi. (Lezhin)
Industry officials said that webtoons serve as the “bridge” between text and moving images amid the transition of the mobile content sector seeking to offer more videos than texts.

Despite rapid growth over the years, webtoons should always focus on providing rich stories.

“We are beginning to see the formation of Korea’s webtoon industry where the perception of consumers willing to pay for comic content has improved,” said Koh Sun-mi, PR supervisor of Lezhin Entertainment, one of the country’s leading webtoon platforms.

“To sustain, we always have to remind ourselves of the most basic thing, and that is: courage to keep on creating quality and original content for readers.”