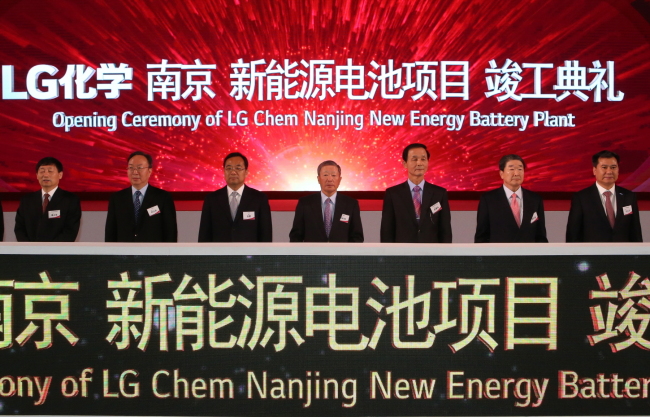 LG Group chairman Koo bon-moo (center), vice chairman Koo Bon-joon (second from right), and Chinese local government officials and executives from partner companies participate in the opening ceremony of LG Chem’s production plant in Nanjing, China on Tuesday. (LG Chem)
“LG Chem has taken an important step forward with the completion of the manufacturing facilities in the world’s largest EV market,” said Kwon Young-soo, the chief executive of LG Chem, in his welcome speech at the opening ceremony of the plant Tuesday in the Chinese city.

“The company will put focus on growing the Nanjing plant to serve as a core manufacturing base for EV batteries,” he added.

The three-story plant with 25,000 square meters of surface area is capable of rolling out batteries for 50,000 best-in-class electric vehicles per year, or 180,000 plug-in hybrid electric vehicles.

It is equipped with facilities that produce battery cells, modules and packs. A cell, consisting of a positive and a negative electrode, is the smallest unit in a battery and a battery module consists of several cells. A battery pack is made by connecting battery modules.

The company, which now runs three production sites including one in Ochang, Korea, and another in Holland, Michigan, in the U.S., aims to take the lead in the world’s EV battery sector by producing batteries for more than 200,000 electric vehicles, or 700,000 PHEVs, by 2020.

Under LG Group chairman Koo Bon-moo’s leadership, the conglomerate has been pouring its resources into what the company sees as the next growth engines, including the vehicle component business and display business.