[ The Korea Herald – Send E-mail ]
83% of Korean MERS cases stemmed from 5 patients
One more patient dies, raising death toll to 37
By 이주희
Published : Oct 25, 2015 - 18:10
Updated : Oct 25, 2015 - 18:10
Over 83 percent of Middle East respiratory syndrome transmissions in Korea were linked to five super-spreaders during the outbreak in South Korea this summer, the Centers for Disease Control and Prevention said Sunday.

The nation’s death toll, meanwhile, was raised to 37 on Sunday after another patient died. The patient was recovering from the aftereffects of MERS after testing negative earlier. The 152nd patient received a lung transplant after suffering from MERS but failed to recover fully. Following the latest death, the fatality rate of the disease in Korea rose from 19.4 percent to 19.9 percent.

The CDC said that the five super-spreaders, all of whom had pneumonia, transmitted the virus to 153 of the 184 patients detected between May 20, 2015, and July 13, 2015. Two of the total 186 infected patients have been excluded from the denominator as their transmission routes remain uncertain, the CDC said.

Thirty-five-year-old patient No. 14, for instance, spread the virus to 85 people while staying at Samsung Medical Center, showing the strongest contagiousness observed from the crisis, the CDC said in its report. 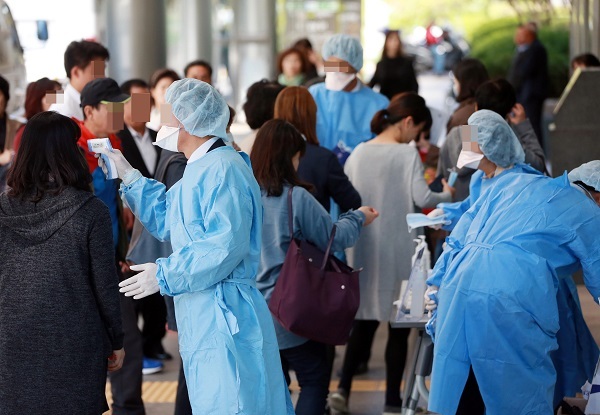 Officials take the temperature of hospital-goers at Samsung Medical Center in Seoul on Oct. 13 after one of the patients recovered from MERS was diagnosed again. Yonhap

The CDC published these and other epidemiological results on Korea’s MERS outbreak on the Osong Public Health and Research Perspectives journal. This is the CDC’s first such report on the MERS outbreak here.

The CDC said it has defined those as super-spreaders if the patient had transmitted the virus to at least four people.

The median age of the super-spreaders was 41 years and they all contacted hundreds of people while staying at their respective medical facilities. Four of them were men.

These patients were hospitalized for an average of 10 days, and the number of people who came into close contact with them ranged from 288 to 805. While patient No. 14 wore a mask intermittently, other super-spreaders did not wear one. None received aerosol-generating treatment.

Of the 186 patients infected across 16 hospitals, some 44.1 percent of the cases were patients exposed in hospitals, 32.8 percent were caregivers, and 13.4 percent were health care personnel.

The most common presenting symptom was fever and chills. The estimated incubation period was 6.83 days and the serial interval was 12.5 days.

The report said the respiratory droplet route is seen as the most likely method of transmission but that further survey is currently ongoing.

The patient No. 1 started developing fever and myalgia on May 11 after returning from a business trip to Bahrain, the United Arab Emirates and Saudi Arabia. His diagnosis did not come until May 20, partly due to a failure of him telling medical staff the countries he had traveled to in his first several hospital visits.

By then, he had already come into contact with over 600 people during his multiple visits to different hospitals. Twenty-six cases of infection were confirmed among these initial contacts, and consecutive transmission via hospitals rapidly proceeded throughout the nation, the report explained.

Even upon the first diagnosis, only three were placed in isolation. The number then increased to 64 the next day and to 120 upon the diagnosis of the fifth patient. Those who were not placed in isolation soon enough further transmitted the virus at other hospitals, some of them becoming super-spreaders.

The analysis showed that the mortality rate of those aged 65 and over was almost eight times higher than that of younger patients.

History of diabetes, malignancy and the presence of underlying respiratory disease, cardiac disease and chronic kidney disease were also significantly associated with mortality.

MERS is a viral disease that is still fairly new to humans. No vaccine or treatment is currently available for the disease, which contributes the high fatality rate of around 36 percent globally.

There currently is only one MERS patient in South Korea. Thirty-five-year-old patient No. 80 tested negative for the virus on Sept. 30 and again on Oct. 1 but tested positive recently.