Apple Inc.'s two latest smartphones went on sale in South Korea on Friday, with the industry poised to keep close tabs on the market for possible overheating on the retail front. 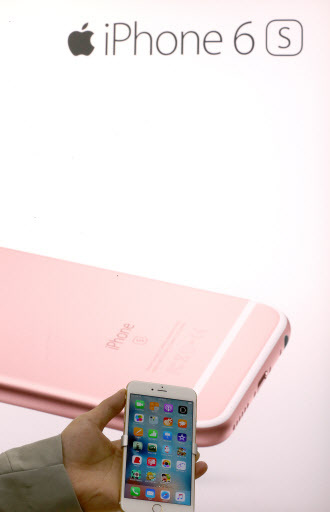 (Yonhap)
The price of the iPhone 6s Plus starts from 999,000 won and runs to 1.26 million won depending on the phone's storage capacity.

The mobile carriers each held a launching event for the new iPhone series earlier in the day, offering various promotions and free gifts to woo consumers.

The release of a new iPhone series usually draws heated interest here among consumers, including Apple loyalists, and the entire industry.

Huge demand for the new iPhones has been a trigger for the mobile carriers to risk giving large sums of rebates that passed the legal limit in order to steal customers away from rivals.

In October last year, the government came up with a new handset subsidy law to curb the excessive paybacks. Yet it proved to be less than effective when the iPhone 6 series went on sales later in that month and retail vendors began to splurge subsidies.

Industry watchers are paying close attention again this time as to how the market will response to the two upgraded iPhones, although many bet that there won't be as much of a fuss as the previous releases due to tougher market conditions.

The online presales of the iPhone 6s series, which ran through this week, ended in early closures as they sold out in the first few minutes of the start.

Of the early purchases, 30.4 percent booked the new rose gold model, while preorders for the silver iPhone 6s Plus came in at mere 0.1 percent, according to one of the mobile carriers. (Yonhap)