Sitting at the midway point between Prague and Berlin, the city is famous for hosting the oldest Christmas market in Germany, for its Saxon history, and for being a part of the former East Germany.

However, it is less well known for the revival it has experienced since the end of the Cold War, during which it rebuilt its old glory and began creating a modern counterpart to its historic areas. Today, Dresden offers a balanced tourist experience for those who want to see a glimpse of Germany’s past as well as its present. 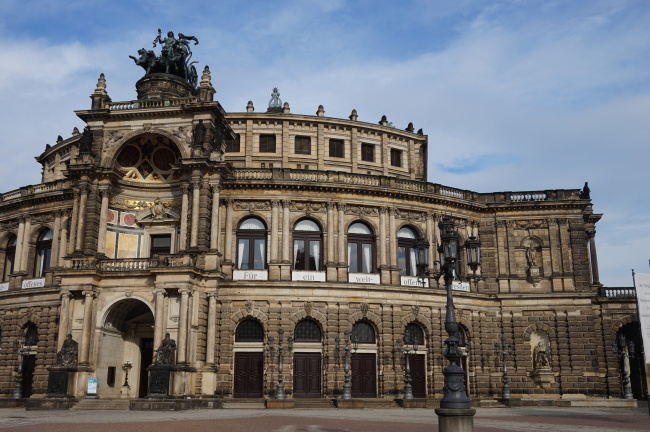 The Semper Opera House in Old Town (Won Ho-jung/The Korea Herald)
Known to many as the “German Florence” for its striking beauty and rich art infrastructure, including the Academy of Fine Arts and the famous Semper Opera House, Dresden offers a well-rounded experience of historical buildings and natural sights along the Elbe River. For those who are unaware of Dresden‘s history, the buildings hide an interesting secret -- they are all relatively new.

“Dresden, and its 800-year history, was totally destroyed in World War II,” explained Annette, a tour guide who was born and raised in Dresden. “All of the monuments were rebuilt in the same style.”

The new buildings, the reconstruction of which she says was almost completely paid for with public funds, can be best admired from Theaterplatz, or Theater Plaza in Dresden’s Old Town.

Start at the equestrian statute of King Johann, which stands in the center of the plaza. You’ll find yourself surrounded by the ornate Semper Opera House, the Zwinger Palace (which now serves as a treasure museum and is famous for its courtyard) and the Royal Palace (Residenzschloss) across the street. When touring the buildings, a close and careful look at the stones will reveal spots where the color alternates between black and beige.

According to Annette, that is because the reconstruction took place with some of the old stones.

The number of historic sites packed together within walking distance in the heart of Dresden is dizzying. Visitors can take a break from the buildings that start to blend together by taking a ride down the Elbe in a steamboat, enjoying lunch on the water. The trip on the boat is narrated by a recording in German and English explaining the various sights on the banks, including old train tracks, cable cars, villas, farms and vineyards that still grow grapes today. According to Wolfgang Gartner from the Tourism Marketing Company of Saxony, it’s the “best experience in Dresden.” 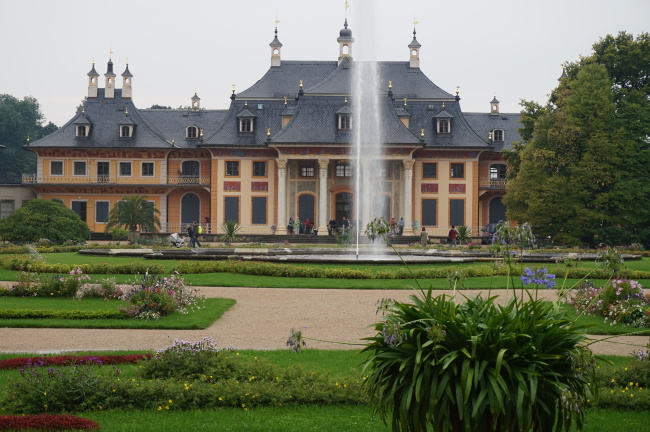 The hillside place at Pillnitz Palace and Park, with Asian influences (Won Ho-jung/The Korea Herald)
On the boat, head to Pillnitz Palace and Park, a former retreat for ruler Augustus the Strong. There, nestled in the bank of the Elbe, stands a grand complex consisting of two castles, a vast garden and a glass greenhouse. Visitors from Asia will be interested to see that the Hillside Palace was built in the chinoiserie style, an Asian-inspired Baroque theme that was trendy among the Saxon rulers, according to Annette.

The castles serve today as museums, but the true attraction is the giant garden with its beautiful fountain. Either take a stroll along the cut walking paths, or explore deep into the park where the perfectly groomed gardens make way for overgrown bushes and old trees that give off a forest feel.

Dresden’s historical sites are a lot to take in, and in the evenings it’s best to wind down with some familiarity. Head toward Neustadt where you’ll be eased into the modern era by passing through Baroque period-style townhouses and courtyards. The flat facades of the buildings, combined with the eye-catching color scheme in some of the streets, will make you feel as if you are on the set of a period film.

The area between Haupstrasse and Konigstrasse, in particular, has become an upscale shopping district with stylish boutiques, cafes and restaurants.

After passing through the Baroque Quarter, make your way to Outer Neustadt, known as the Alternative Quarter, the hub of Dresden’s nightlife. The streets here are decidedly less organized than the Baroque quarter, with backyards and alleyways tangling together and lit up by pubs and restaurants. Here you’ll find the party scene for Dresden’s 40,000-strong college student population, and one of the rare spots in Dresden open late at night.

If you make it to Outer Neustadt before dark, there are two must-see destinations in the area that are better when the sun is still up. The first is Kunsthofpassage, a passage that connects a series of themed courtyards filled with colorful and imaginative building designs. This is an excellent place to shop for quirky souvenirs or to enjoy a relaxing drink or meal. 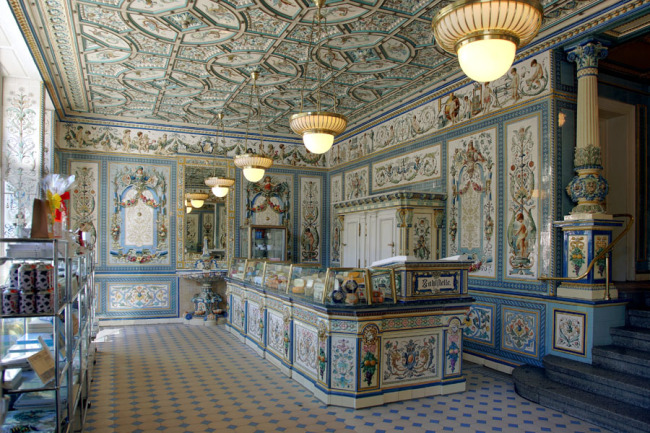 The Pfunds Dairy store in Outer Neustadt (Pfunds)
The second is Pfund’s Dairy, which is advertised as the “Most Beautiful Milk Shop in the World.” Better known as the filming location for Wes Anderson’s recent film “The Grand Budapest Hotel,” the shop is beautifully and ornately decorated, with a restaurant on the second floor that serves various dishes featuring dairy touches.

There are several things to keep in mind when touring the historic sights of Dresden.

1. Start off touring early in the morning, beginning at Theaterplatz. Since the sights are so close together, the best way to move around is on foot -- and it’s a much more pleasant walk in the morning.

2. Do not schedule your historic sightseeing on a Monday. Many of Dresden’s renovated buildings currently serve as museums and most are closed on Mondays. This is especially important with regard to the Pillnitz Palace and Park, which takes over an hour to reach by boat.

3. Be sure to leave plenty of time for boat travel. The boat can be delayed or slowed down if there isn’t “enough water in the river.” You can be stranded on the banks of the Elbe indefinitely if this happens.

4. While it’s true that most of Dresden’s attractions are within walking distance of each other, it’s not necessary to walk. The trams that run in the middle of the street are excellent. Don’t panic if you can’t find a ticket machine before you get on; the machines are on the trains themselves. Also, there are no crosswalks leading to the trams. You essentially jaywalk to the tram and push the button to open the door before any moving traffic manages to hit you.

German carrier Lufthansa offers daily flights on their newly revamped planes to Frankfurt and six flights weekly to Munich from Seoul. You can transfer to a short domestic flight from those two cities into Dresden. Economy seats begin at 766,000 won ($678). Lufthansa also boasts in-flight Wi-Fi services on its long-haul flights, which is definitely an experience worth checking out.