A film festival’s star-studded red carpet is brought to your home in a 360-degree panoramic view. Virtual reality and hologram technology provides an alternative to live concerts, enabling fans to digitally interact with their stars -- dead or alive.

Entertainment today mingles with new technologies, churning out innovative new ways of engaging people with music, films or various other forms of entertainment. And in the convergence of the two, or even more, design plays a key role, with its focus on customer experience and aesthetics leading to the creation of new values.

The recent pair-up of Google and the Busan International Film Festival shows how entertainment, technology and design can create a synergy, when merged together.

Busan International Film Festival`s opening ceremony is being shown in 360-degree panoramic view enabled by augmented reality technology as part of the "Google Play Inside BIFF" project, aimed at bringing Asia`s largest film festival, which took place in the Korean port city Oct. 1-10, to the fingertips of movie buffs around the world. (Google)
Through the “Google Play Inside BIFF,” Google brought scenes from the event readily available at the fingertips, using user-interface designs that enabled viewers to experience the festival without hopping onto a plane to the Korean port city.

“With the fusion between culture and digital technology, movie fans will be able to enjoy the festival in much more diverse ways,” said Paul Kim, head of marketing, devices, content and retail for Asia-Pacific at Google in Busan during the festival earlier this month.

The growing emphasis on design in the field of entertainment is more palpable in physical cinemas.

Movie theaters are expanding legroom and installing tables and hooks for bags, as theater franchise Megabox did for its Boutique M in southern Seoul last year. In the higher-priced section, visitors can recline in their seats and receive a “welcome package” that includes a blanket, slippers and a bottle of Evian water.

IMAX and 4DX theaters take watching a movie to another level. “Gravity” has won praise for its grand visual effects, but what really took the breath of its audience (and earned it an Oscar) was its unusual sound design. If you saw the blockbuster at an IMAX theater, you might feel like grabbing the seat when the meteor seemingly flew into your face. At a 4DX theater, you probably should, as your seat will actually jerk and wind will hit your face with a hint of smoke. Design and innovation can turn an ordinary form of entertainment into a whole new kind of experience.

On the other side of the screen: When you thought you have probably seen anything that can be seen on the big screen, the recently released animation “Inside Out” proved you wrong. Pixar, the animation studio known for technical breakthroughs, has done it again, unfolding our emotions in a beautifully orchestrated landscape inside the brain of an 11-year-old girl. 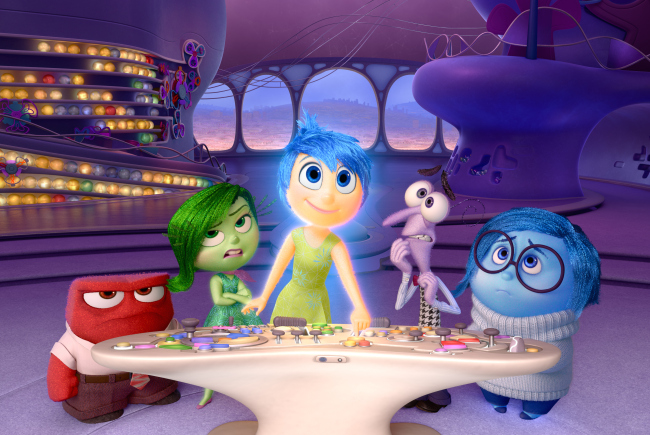 Pixar-Disney film "Inside Out" (Walt Disney)
Based on its three major principles -- story, believability and appeal -- Pixar’s animators give faces to “fear,” “anger,” “disgust,” “sadness” and “joy”; and they dazzle, delight and bring tears for children and adults alike. The animated movie was one of the biggest hits of this year, attracting about 4.9 million viewers in Korea.

The colors, forms and even the sounds (especially the voices in this case), bring the story to life. Again, design plays a key role. Sometimes it can even take the driver’s seat as shown by “Minions.” The animated film itself did not fare so well critically, but thanks to its fresh, eye-catching yellow characters, it drew about 2.6 million moviegoers.

Animations today owe much of their success to computers, but animators and artists at first were “afraid of computers,” recalls Alvy Ray Smith, cofounder of Pixar Animation Studios. But “computers design the world you see (with software),” he notes.

Innovative design and technology are tapping into the full potential of the entertainment industry, as the noted pioneer Smith would testify in person at this year’s Herald Design Forum.

Media artist Lee Lee-Nam, whose internationally acclaimed digital works illustrate how art can transcend time and space, will share his insight into crossing the boundaries. “Innovation is finding an organic connection between things that are seemingly not connected at all, and integrating them in the end,” he said. “By juxtaposing contrasting factors such as old and new, you can give out strong impressions of ‘newness,’” said Lee, who believes “how to combine what is already here is the key.”

The forum will be held at the Grand Hyatt Seoul on Nov. 10, under the theme of “Design Platform Adds Value through Integration.”