A string of various regional events and festivals promoting the beauty of chrysanthemum flowers will be held across the country beginning next week. 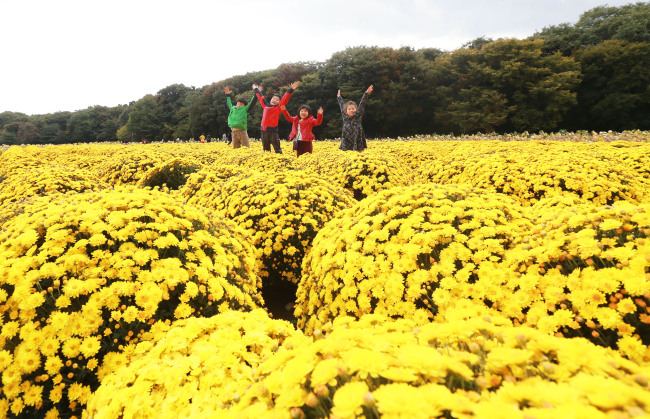 The festival, which was launched in 2004, will have various programs for visitors to make and see works of art made of autumn flowers. It will also invite tourists to try out regional dishes made of sweet potatoes and beans.

Under the theme of “Autumn Tales Through the Scent of Chrysanthemum,” Hampyeong will decorate the main entrance of its festival as the Gwanghwamun Gate with flowers to commemorate the 70th anniversary of Korea’s Liberation Day.

The Masan Chrysanthemum Festival, which will be held for 10 days from Oct. 30-Nov. 8, is one of the biggest flower festivals in the country.

Launched in 1960, chrysanthemum farming in Masan accounts for some 13 percent of the country’s total, and the festival’s grand artwork of 1,315 chrysanthemum flowers was recognized by the Guinness World Records in January 2010. The artwork was displayed at the 2009 Masan Chrysanthemum Festival in the fall. Since then, it has been breaking its own record of displaying the most flowers.

This year, it will make and display a 6.5-meter-high black-tailed gull sculptural artwork decorated with the flowers. The festival will also include chrysanthemum displays of a wish tower, dinosaurs and a maze.

In Iksan, North Jeolla Province, the Iksan Ten Million Chrysanthemum Festival will kick off on the same day as Masan’s flower festival for 10 days, exhibiting a variety of flower artworks, contests and performances.

Goodtrae Chrysanthemum Festival near the Gungnamji Lake in Buyeo, South Chungcheong Province, will also display flower works retelling the legendary love story of the Silla Kingdom’s Princess Seonhwa and Baekje Kingdom’s Prince Seodong. According to Korean folktales, the two met and fell in love at the lake. Prince Seodong later became King Mu, the 30th king of Baekje, one of the Three Kingdoms of Korea.

Other chrysanthemum events in Seoul include the Seoul Chrysanthemum Exhibition and a festival at Jogyesa Temple.