The strategic content deal allows Japanese small business owners to create their own video ads through the portal, the country’s most visited website, on the new platform Yahoo Japan Video Creator, which is powered by Shakr and launched last month. 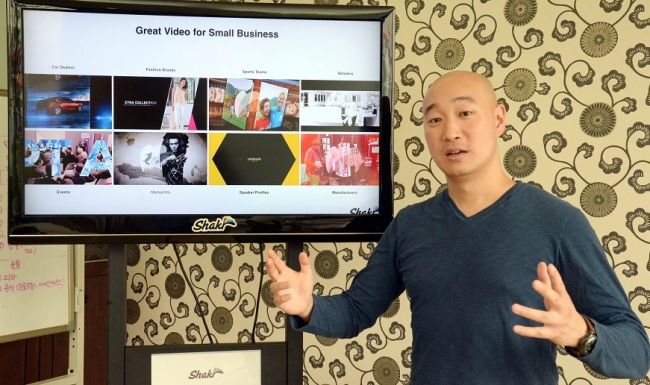 Shakr CEO David Lee poses ahead of an interview with The Korea Herald at the company`s office in Gangnam, southern Seoul. (Chung Hee-cho/The Korea Herald)
CEO David Lee says Shakr’s vision has always been to help the underdog. As the start-up’s purpose is to enable everyone to tell their stories effectively with great video, the large population of small businesses in Japan makes it an ideal market for its platform, he adds.

“Japan has a long history of independent small businesses that are passed on from generation to generation. For this reason, small businesses in Japan play an incredibly influential role, not just in Japan, but worldwide,” he told The Korea Herald in an interview. “We are excited about our ability to make a meaningful difference in this market.”

The Korean-Canadian was born into the world of small business. His father, a Korean salaryman, migrated to Canada and developed an X-ray repair business for small medical clinics. His sisters -- a surgeon and a lawyer -- now run their own practices. And despite the wishes of his mother, who hoped he would become a salaryman, Lee cofounded his first start-up at age 13 designing amateur websites for customers he found in the phone book.

Now the serial entrepreneur, who moved to Seoul in 2008 and founded Shakr in 2010, is taking the chance to help small businesses in his motherland -- its largest market -- and beyond to upend big businesses’ domination of the fastest growing ad format on the Internet today. Online video ad revenue is expected to near $5 billion in 2016, up from $2.8 billion in 2013.

And the offline venues for video in pixel-dense Seoul are endless, with displays everywhere from subways to convenience stores and taxis to the inside of refrigerators, he notes.

“Overall the video industry is growing (like) a tidal wave,” he said. “The sea level is rising and it will lift all boats when it comes to video. Shakr is one of those boats, and will hopefully be a very big one, carrying a lot of small businesses with us.”

Shakr facilitates independent designers to create easy-to-use video templates complete with a music track and editable text. Users upload photos or video clips and create a commercial within five minutes. It’s the ideal solution for small businesses that need advertising fast and cheap as they can spend $80 on an ad that would have cost $5,000, Lee says.

And the sleek-looking Shakr videos are seeing a higher click-through rate of 5 to 7.5 percent compared to the 4 to 6 percent average on Facebook, which sees an unprecedented 4 billion video views every day. As every video creation site is driven by templates, the quantity and quality of its collection give Shakr the leg up against its competitors, Lee says.

The CEO also expresses a sense of satisfaction about the creative and financial empowerment it gives the freelance designers, who earn royalties for each video made with their template. Some have been able to quit their day jobs to make templates. Popularity is growing fast, with the number of designers jumping from 265 in July to 900 today, and the database contains 1,200 templates and counting.

The video-maker follows the organic traction of those designers who tailor their products to local markets, which has led its business to Taiwan, the U.S. and now Japan, which Lee expects to become its biggest market with the Yahoo deal.

Start-up Seoul is a series featuring players in Korea’s emerging tech start-up scene. This is the 11th installment. ― Ed.