[ The Korea Herald – Send E-mail ]
Cabs to get incentives for Gangnam Friday night rides in Seoul
By 이다영
Published : Oct 2, 2015 - 18:37
Updated : Oct 2, 2015 - 18:37
Cab drivers who accept passengers near Seoul’s busy Gangnam subway station on Friday nights will be given incentives worth 3,000 won per ride starting later this month, according to the Seoul Metropolitan Government.

The move was announced to tackle the chronic shortage of cabs at night with taxi drivers choosing and picking long-distance passengers especially during the peak hours of weekend nights near popular nightlife areas such as Gangnam in southern Seoul and Hongdae in the western capital.

While it is illegal to refuse passengers under the current law, the city government hasn’t been successful in cracking down on errant cab drivers. Reports have shown that one of the reasons for such fierce competition for cabs in the late hours is due the fewer number of owner taxi drivers choosing to work at night. Self-employed cab drivers account for almost 70 percent of all taxis in Seoul. 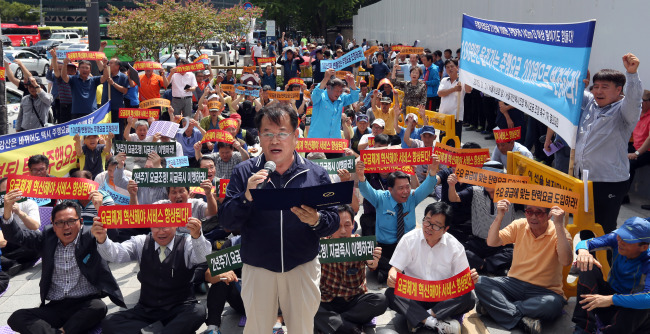 Self-employed cab drivers protest against the current taxi rates in Seoul earlier this month. (Yonhap)
The other 31.6 percent of all Seoul-based taxi drivers are hired by companies, and therefore cannot choose their own work shifts. According to a study by the city government’s think tank Seoul Institute, owner-drivers preferred not to work during late hours as they wish to avoid physical fatigue and drunk passengers.

According to government data, 30.9 percent of all personal cab drivers never worked from midnight until 2 a.m. throughout last year. Meanwhile, 37.5 percent of them worked in those hours for only 1 to 15 days last year. To maximize their profit, drivers who work late hours often refuse passengers whose destination is too close from the origin, or whose destination is too far from where they live.

Seoul Metropolitan Council member Park Jung-hwa of the ruling Saenuri Party, who introduced the bill, said incentives may be more effective in combating the problem than a clampdown. “We hope the incentives will encourage more drivers to work at night,” he said.

The new system will have a trial period from later this month until December. During this period, all drivers -- both the self-employed and those working for cab companies -- will earn incentives worth 3,000 won per ride if they take passengers near the Gangnam Subway station from midnight until 2 a.m. on Fridays.

Starting January, the same incentives will be given to those who take passengers near Hongdae subway station in Seoul’s Sinchon district, the SMG said.