[ The Korea Herald – Send E-mail ]
Crime rate surges among the elderly in South Korea
By 이다영
Published : Oct 1, 2015 - 18:18
Updated : Oct 2, 2015 - 18:23
The number of crime cases committed by the elderly has increased significantly from 2010 to 2014 in South Korea, while the general crime rate in the country dropped in the same period, according to figures released by the police here. 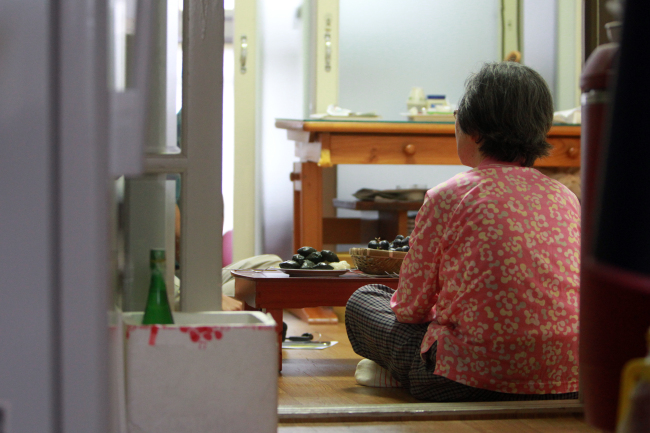 More than 80 percent of the Korean elderly are known to spend their leisure time solely by watching TV, while 1.02 million out of 5.42 million senior citizens are reported to be living alone as of this year. (Yonhap)
Among the elderly criminals, those who committed violent crimes -- murder, rape, robbery, arson and aggravated assault -- surged dramatically by 61 percent, from 1,129 in 2010 to 1,869 last year. Among the elderly who committed violent crimes, in particular, elderly rapists increased by 75 percent from 2010-2014. A total of 1,699 elderly Koreans were arrested on rape charges last year, accounting for about 89.3 percent of all violent crimes committed by senior citizens.

Also, the number of theft cases committed by the elderly surged by 37.9 percent in the same period, while all theft cases in the country dropped by 16.2 percent. Last year, some 2,280 senior citizens were reported for stealing goods.

Some of the high profile crimes committed by the elderly in recent years include the 2008 Namdaemun Gate fire, in which an arsonist in his 60s set fire to Seoul’s historic Namdaemun gate -- leading to the 550-year-old property’s complete destruction and eventual restoration.

Last year, a man in his 60s was arrested for sexually harassing four elementary school girls by taking photographs of their body parts in Yeongam, South Jeolla Province. In August, a man in his 70s was arrested on rape charges against his step-granddaughter. He reportedly sexually abused the victim about 10 years before, when he was in his 60s and the woman was a teenager.

Rising elderly poverty rates and social isolation are being blamed for surging crime rates among the elderly here. According to the government-funded Korea Labor Institute, 48.6 percent of Koreans over 65 lived below the poverty line as of 2011, the highest rate among the Organization for Economic Cooperation and Development countries.

More than 80 percent of the Korean elderly are known to spend their leisure time solely by watching TV, while 1.02 million out of 5.42 million senior citizens are reported to be living alone as of this year.

Meanwhile, the number of Korean elderly women who have been infected with sexually transmitted diseases increased from 662 in 2010 to 1,447 in 2014. The police earlier this year arrested a total of 33 mid-aged and elderly women, known as “Bacchus ladies,” for illegally selling sex to elderly men spending time at Seoul’s historic Jongmyo Park. Most of the women were 50 or over, while one of them was 81 years old.

“Many things have to be done, but I think education is the key,” said professor Lee Geum-ryong from Sangmyung University. “More senior citizens should be informed about how to stay healthy and safe, how to manage their finances, how to participate in the society and stay connected to the community. Such programs are already available, but there definitely should be more.”