The center, located in Eunpyeong-gu district of Seoul, is where some 120 infants were exposed to the TB virus while staying there from June 4 to Aug. 18. Each baby stayed at the facility for about a week. The nurse, who reportedly infected the infants, was told by her doctor in July that she may be TB-positive after taking a chest X-ray but continued to show up at work regardless.

At most postpartum care centers, considered unique to South Korea, newborns stay in a separate room with other babies away from their mothers, and are looked after by nurses in shifts. They are united with their mothers for breast-feeding and other bonding time. The schedule for the mothers, who often opt for the service for postpartum rest, includes body massages, facials, educational classes on child care and workout sessions. 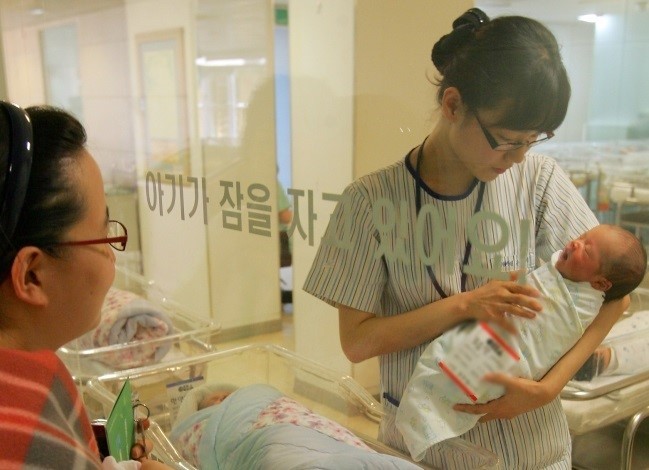 A mother (left) looks at her newborn at a hospital in Seoul. Many young mothers in Korea choose to go to postpartum centers right after they are discharged from hospitals. (File Photo/ The Korea Herald)
This isn’t the first time safety concerns about the postpartum care facilities have been raised. According to Rep. In Jae-keun of the main opposition party New Politics Alliance for Democracy, the number of mothers and newborn children who developed infectious diseases while staying at such centers increased dramatically from 2013 to this year, from 49 to 270.

The diseases included pneumonia, pertussis, respiratory syncytial virus and rotavirus, which is one of the most common causes of severe diarrhea among infants and young children.

Meanwhile, the number of postnatal care facilities also increased significantly since 2006, from 294 to 602 last year, buoyed by high demand from mothers here. As of this year, 68.8 percent of new Korean mothers opt to stay at such centers instead of home right after their deliveries. More than 60 percent of the centers are located in the Seoul and Gyeonggi regions.

From 2013-2015, 122 centers -- about 20 percent of all facilities -- were reported to the authorities for hiring unqualified nurses, while 113 facilities faced disciplinary measures for not educating their staff on infectious disease control and prevention as required.

Also, the number of complaints filed to the Korea Consumer Agency by those who stayed in postpartum care facilities also rose from 510 in 2010 to 1,200 last year. Some of the complaints were about unsanitary kitchen and poorly cooked meals.

The Korea Centers for Disease Control and Prevention is testing the 120 babies who stayed at Seoul’s Eunpyeong district-based center for possible infection. According to the parents who filed the damage suit, 26 babies out of 46 who have been tested turned out to be latent TB-positive.

This means the TB bacteria is in the children’s bodies but inactive and therefore causing no symptoms. Without treatment, about 5 to 10 percent of infected persons with latent tuberculosis (LTB) develop TB disease at some time in their lives.

Choi Myung-joo, one of the parents who are suing the center, claimed that the infected babies are now required to take Rifampicin, also known as Rifampin, an antibiotic to treat LTB for a maximum of nine months. All tuberculosis medications, including Rifampin, can be highly toxic to the liver, especially of children.

“A lot of the infected children are less than 100 days old,” she wrote in her open letter to Rep. Ahn Cheol-soo of the NPAD.

“It breaks our heart to see our babies having to take such strong medicine every morning at such a young age.”

Some of the infants reportedly have been showing symptoms of side effects of the drug, including vomiting and sleeping too much. Worried about the possible liver damage, a number of mothers chose not to have their children take the medicine and wait until they are older to start the preventive TB treatment.

Despite such increasing health scares at postpartum centers, they are considered efficient in helping new mothers recuperate and learn child care tips.

Traditionally for Korean mothers, the first three weeks after birth have been strongly emphasized in postnatal care. Some of the traditional customs still being practiced to this day -- now mostly at postpartum care centers -- include eating seaweed soup and keeping their bodies warm by wearing long sleeves even in the summer season. One of the traditional Korean health beliefs is that if a woman does not stay warm after the delivery, her joints will ache when she gets older along with other health problems.

Before the emergence of postpartum care facilities in the late 1990s, the care was usually provided by the mothers’ family members -- usually the maternal grandmother of the newborn -- at home. Today, the centers are considered useful especially among women whose mothers are not available to help with their postpartum care or those who don’t want to burden their parents after the delivery.

The fees for the centers, however, differ dramatically according to regions. According to Rep. Nam In-soon of the main opposition NPAD, the most expensive facility was located in Seoul’s glitzy Gangnam district, which charged 20 million won ($17,046) for two weeks’ worth of service, while the cheapest center was in Gimje, North Jeolla Province, which charged 550,000 won for the same period.

The most expensive facilities, mostly located in southern Seoul, are known to serve meals prescribed by nutritionists and made with only organic ingredients, while offering rooms that resemble five-star hotel suites.

“I think postpartum care is a necessity than a luxury for most moms,” said Kim Yeon-soo, a mother of a 2-year-old. “A lot of people I know have no choice but to go to these centers because they have no family to look after them and their babies after delivery. I don’t think every woman needs a center that’s like a five-star hotel. But every women should have an access to at least clean and safe centers if they really need to utilize the service.”

Seongnam City located South of Seoul, has been pushing to introduce fully-subsidized postpartum facilities as part of the efforts to increase low birthrate. However, the Health and Welfare Ministry disallowed the plan and urged the city reconsider it for infection and safety concerns.