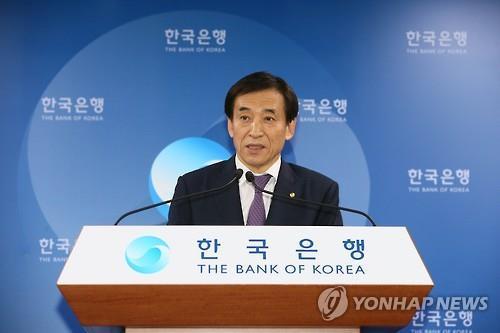 Bank of Korea Gov. Lee Ju-yeol speaks during a press conference for the August rate-setting meeting at the BOK head office in Seoul. Yonhap
Expectations of another cut in the benchmark interest rate in October are running high as the central bank chief hinted at efforts to boost exports and revitalize economic activities.

In the aftermath of the recent U.S. Federal Reserve’s key interest rate freeze and China’s financial uncertainties lurking in the background, speculations are rising about what would be the fifth rate-cut in less than 14 months.

Bank of Korea Governor Lee Ju-yeol said on Thursday that the four rate cuts over the past one year might not be enough. The key rate was last slashed to 1.5 percent in June.

“I think there is a bottom line for a nominal rate, but the current one hasn’t quite reached there yet,” he said at the National Assembly’s annual audit into the bank.

“Because there were too many uncertainties and shocks overseas, we weren’t able to see the full-fledged effect of the economic policies in consumption and investment,” he said. Even coupled with the government’s stimulus packages and supplementary budget, the country’s consumer price index has stayed below BOK’s target of 2.5-3.5 percent.

Lee’s comments were perceived as an indication of another rate reduction next month, which he had conveniently adopted as a means to battle flagging global demand hit by China and Japan’s devaluation of their currencies.

In June, Lee had cited the outbreak of Middle East respiratory syndrome knocking billions of dollars off the market as the trigger to the “preemptive measure.” The central bank claimed that the rate cut would result in a maximum of 0.71 percentage point rise in the country’s economic growth rate.

“We expect a duller economic forecast in October, and calls for another rate cut will go wild then,” analyst Park Jong-yeon reported.

The slowdown in exports -- marking 14.7 percent decrease in August, or $1.7 billion daily reduction heavily affected by the sluggish oil price and the volatile Chinese market -- is also pressurizing the authorities to take risks.

Global investment banks including HSBC, BNP Paribas and Morgan Stanley forecast additional rate discount by the end of the year.

An additional cut is expected to strain the households including the rise in housing loans, said Rep. Kim Kwan-young of the main opposition New Politics Alliance for Democracy.

The lower rate has boosted the country’s household debt which is forecast to reach 1,160 trillion won by the end of the year, up 30 trillion won from a year before.

“Before making any further decisions on a rate cut, we will put all things into consideration, including the effect of developing the country’s economic output and China’s slowdown, as well as its impact on households,” Gov. Lee said.