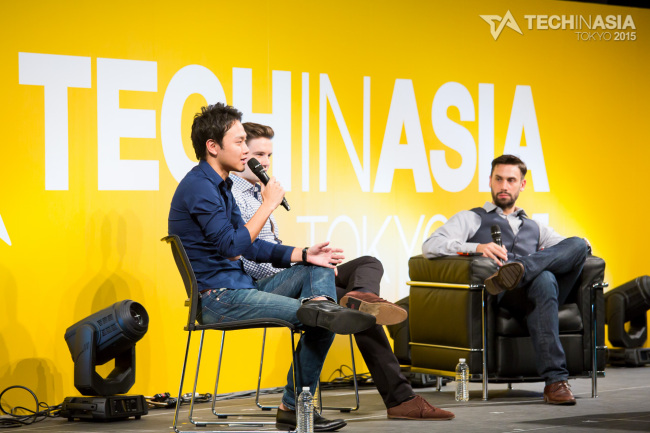 VIP Plaza CEO Tesong Kim (left) speaks about doing business in Southeast Asia at Tech in Asia Tokyo 2015 in Shibuya, Tokyo, last week. (Tech in Asia)
TOKYO ― In a region where masses of users are newly armed with smartphones and more spending power, Southeast Asia is a new gold mine for tech enterprises.

China’s quickly saturating market for all things tech has pushed Asia-bound start-ups to seek new territory, and global companies like Rakuten, eBay and Rocket Internet are vying over Southeast Asia with no clear winner ― meaning plenty of opportunities still abound for new players.

Those conditions drew Korean-Japanese entrepreneur Tesong Kim, who led e-commerce at Japanese investor Rakuten’s offices in Tokyo and Jakarta, to launch his own discount retail start-up VIP Plaza for fashion goods in Indonesia, Southeast Asia’s biggest market, in 2014, and recently expand to Malaysia.

And Korea’s start-ups are joining the rush, he says.

They seem to be making bigger waves there than in Japan. He cannot list any Korean start-ups with a big presence in the country, a closed, conservative market that is a nut nearly impossible for foreign companies to crack. But in expanding to Southeast Asian markets like Singapore, Indonesia and Malaysia, he says they are far more active than their Japanese rivals.

“Korea is quite aggressive in Southeast Asia, I think more aggressive than Japan in terms of e-commerce start-ups,” he told The Korea Herald in an interview on the sidelines of tech start-up conference Tech in Asia Tokyo 2015 last week.

“Korea is very crowded. The population is very small, geographically the landscape is very small, and there’s a lot of start-ups. So it’s quite packed, but I think Japanese investors think Korean start-ups can go global more than Japanese start-ups.”

Meanwhile, Kim says Japanese start-ups are trapped at home, falling hard when they try to copy and paste their successful domestic strategies into new markets.

But competition in Southeast Asia is heating up fast. Kim believes Korea’s KakaoTalk lost the messenger app war in the region to rivals like BlackBerry, WhatsApp, LINE ― one successful Japanese exception in the region ― and WeChat because it entered too late.

That’s why it has pivoted to commercial services such as e-commerce when targeting markets like Indonesia, he said.

Not that e-commerce is any easier, as Kim knows from his experience with Rakuten’s Indonesian e-commerce venture and starting his own online discount retailer. Handling logistics, acquiring products and dealing with fragmented, cash-based payment systems takes immense effort.

But due to the region’s overall cheaper costs, he believes Korean and Japanese start-ups underestimate the investments they need to gain ground ― a mistake that will get them steamrolled in the market. “They think that with $1 million-$2 million, they can go to Indonesia, try to develop ― with that kind of mindset, they will never succeed,” he says. “All the very aggressive companies are investing into Southeast Asia with a very big amount of money.”

Even for Korea’s prized e-retailer Coupang, which received a $1 billion boost from Japan’s SoftBank Ventures this year, it might already be too late to test the region’s waters, he said.

“What they have is a know-how of how to sell things, of impulse buying. They have a system and good talents, but they are not localizing the region,” he said. “If they tackle some new country now, they need to invest in everything ― the products, warehouse, marketing and user acquisition.”

But the market is already crowded by Lazada, Elivenia and Rakuten, not to mention 11st and Kim’s own start-up VIP Plaza. “I think it’s already too late in terms of social commerce,” he said. “The better strategy is buying out some local players. It’s not only easier, but much cheaper.”

Still, Japan’s massive opportunities can’t be ignored, he says. Its app market is the biggest in the world, and gaming companies are seizing opportunities. “So in that sense, I think the market is still very big.”

Start-up Seoul is a series featuring players in Korea’s emerging tech start-up scene. This is the 10th installment. ― Ed.