“The government will make sure that workers will not be easily dismissed and forced to make sacrifices,” Park said in a Cabinet meeting, pledging to ensure that reform plans would not be implemented against workers’ interests.

“It is meaningful that the grand compromise would give a boost to the labor market reforms to create jobs and overcome the economic crisis,” Park said, asking the National Assembly to promptly legislate the plans within the upcoming regular parliamentary session.

The tripartite committee of labor, business and government representatives on Tuesday unanimously and officially passed a labor market reform deal that they had reached over the weekend to ease labor restrictions after months-long negotiations. 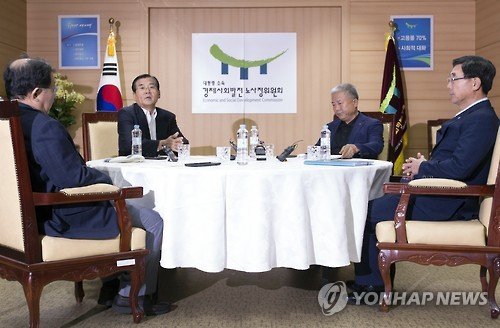 (Yonhap)
Some 10 key officials from each side voted in favor of the draft plans that aim to enhance the social safety net, tackle the widening income gap and discrimination against nonregular workers, increase market flexibility and revamp the overall wage system.

The trilateral committee will be extended by a year to Sept. 18 next year to discuss further steps.

“I ask the members of the National Assembly to put aside partisan interests and support the agreed upon deal for it to be legislated,” Kim Dae-wan, a head of the trilateral committee, said at the meeting.

President Park has set labor market reform as the top priority on her policy agenda in the second half of the year, viewing increased market flexibility as key to generating jobs for the young and reviving the slowing economy.

The government has vowed to implement the reforms within this year, even without workers’ approval as the tripartite committee’s negotiations were bogged down.

In an effort to “share the pain” from the labor market reforms, President Park is planning to set up a social fund in the near future to boost opportunities for the young to enter the labor force, Cheong Wa Dae said. Park will be the first to donate to the fund, it added.

The government-backed fund will receive voluntary donations from the public and be used to fund programs including training for young jobseekers to start their own businesses.

After the breakthrough -- still opposed by staunch labor unionists -- the Federation of Korea Trade Unions head Kim called on the government and business bloc to make efforts to resolve the social polarization and dispel workers’ concerns. The nation’s largest union umbrella group approved the deal at a central executive committee meeting Monday.

Park Byoung-won, head of the Korea Employer’s Federation, welcomed the deal, but the group also expressed regret over the “low” level of market reforms.

“The FKTU’s victim mentality placed the three-way talks in trouble, but I thank the FKTU head for reaching an agreement,” he said. “The business bloc will prove that employers will not abuse the guidelines.”

Five key employers’ groups said in a statement that it would file a petition with the National Assembly to achieve more drastic market reforms for the sake of “economic recovery.”

Meanwhile, the Korea Confederation of Trade Unions, the second-largest and more militant of the top two union umbrella groups, vowed all-out war against what it called the “collusion” among the representatives of labor, business and government. 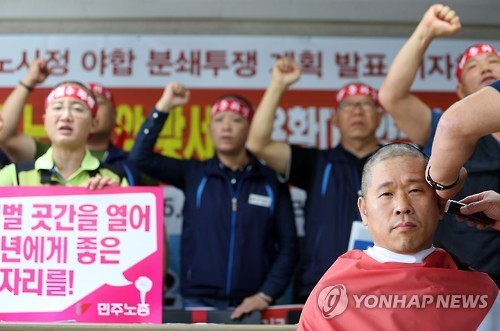 (Yonhap)
Han Sang-kyoon, head of the KCTU, and 20 other key officials from the union, shaved their heads in protest earlier in the day, blasting the tripartite committee for using laborers to meet capitalists’ demands.

The KCTU is set to declare an all-out strike Saturday.

The government’s push for the labor market reforms faced a number of stumbling blocks before its landmark compromise, with the labor circle fiercely protesting its plan to ease restrictions on layoffs and change of company rules without union consent.

Since the three-way dialogue kicked off on Dec. 23 last year, more than 120 meetings took place to seek a compromise.

Under the agreement, the government will establish administrative guidelines designed to ease restrictions for employers to dismiss underperforming workers and change company rules without union approval.

In an apparent attempt to contain the workers’ concerns, the committee stipulated in the draft plan that the government should sufficiently consult with the labor and business blocs when employing measures to overhaul the labor market.