According to the Employment Outlook 2015 published by the Paris-based club of advanced countries, native-born workers received 55 percent higher wages than their foreign counterparts, the biggest gap among the surveyed 22 OECD nations.

Italy and Spain followed Korea on the list, with locals being paid 32 percent more than foreigners, according to the report.

Migrant workers were paid most equally in Slovakia, Canada and the Czech Republic, with the wage gap standing at less than 5 percent. 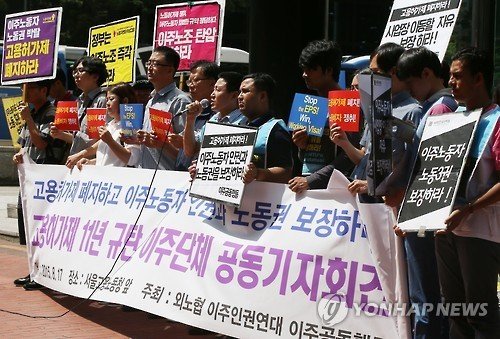 (Yonhap)
The data also showed that Poland and Japan paid higher wages to foreigners, but the OECD excluded these countries from its report due to the small sample sizes of foreign-born workers there.

On average, the wages for local workers across the OECD bloc was 15 percent higher than their foreign counterparts.

In the report, the OECD underscored the role of “skills” in narrowing the wage inequality, noting that a difference in skills accounted for over 70 percent of the wage gap between native and foreign-born workers.

It is particularly “important” to invest in teaching skills for those from lower socioeconomic backgrounds to reduce the gap, it said.

But South Korea’s inequality in wages between locals and foreigners would still remain the highest among OECD countries even if foreign laborers had the same skills, according to the report.

Kim Jong-jin, a researcher for Korea Labor & Society Institute, pointed out that the wage gap shed light on the deeply rooted discrimination against foreign workers and the lack of a legal system to protect their rights.

“It is a trend that migrant workers in advanced countries do dangerous, dirty jobs left vacant by native laborers,” Kim told The Korea Herald. “Whether a country has institutions and laws to protect migrant workers makes a difference in pay gaps across the OECD bloc.”

“Korea still doesn’t have a law stipulating migrant workers’ rights and institutions allowing them to stand up against employers to resolve the pay difference,” Kim added.

“The wage gap is only likely to grow as there seems to be no social discourse over the migrant workers’ rights.”

In Korea, some 825,000 migrant workers are legally working in the country, a large portion of whom are doing unskilled jobs typically in labor-intensive sectors such as construction, manufacturing and agriculture.

According to government data released last year, 45 percent of the foreign workers here are employed at factories, with 31 percent working at construction sites and 12 percent hired in the service industry. Only 12 percent are white-collar workers, according to the statistics.

The data also showed that more than 60 percent of the foreign laborers in Korea had received less than 2 million won ($1,700) in monthly wages, while half of them worked more than 50 hours a week.

But the wage gap between locals and foreigners in Korea is merely the result of the unique structure of the Korean labor market, another expert said.

“Unlike other OECD countries, a large portion of the foreign workers in Korea (represented in the statistics) are those working low-skilled jobs, which consequently come with lower salaries,” Lee Kyu-yong, a senior researcher at the Korea Labor Institute, told The Korea Herald.

“Thus, the wage gap is inevitable and it shouldn’t be seen as discrimination against migrant workers.”