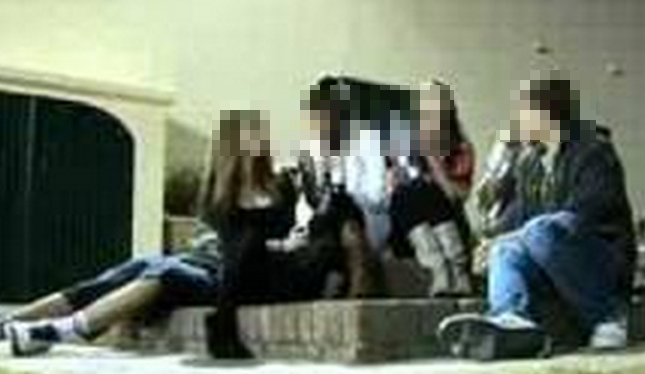 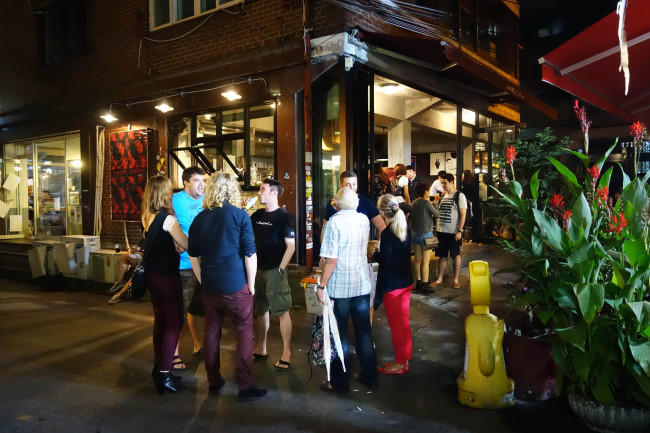 On a seasonably warm late summer evening after work, 27-year-old Choi Min-ji sat on the stoop of Magpie, a popular pub in the Gyeongnidan neighborhood, with a glass of pale ale in her hands.

“It feels so carefree and exotic,” she said, gesturing at the clusters of people who, rather than sitting indoors, were enjoying their drinks while standing outside the establishment.

“It’s liberating to be outdoors after a long day at the office,” said Choi, who works in advertising. “And it would be a shame not to take advantage of the warm weather.”

Choi is not alone in her thinking, it seems. One sight that is becoming more and more common in the Itaewon, Gyeongnidan and Haebangchon neighborhoods -- which have risen in recent years as some of the liveliest nightlife spots in Seoul for expatriates and locals alike -- is people enjoying their drinks in the streets.

Granted, drinking in tented “pojangmacha“ (outdoor eateries) and picnic tables laid out in front of convenience stores is a culture that is by no means unfamiliar to Korea, and one that foreign visitors find particularly “Korean.”

But recently, the Yongsan-gu based neighborhoods have been seeing a different kind of outdoors drinking, where pub-goers bring their glasses outside even when no tables are available. Customers simply perch themselves on the ledges of adjacent sidewalks or stand in huddled groups, holding glasses of beer in their hands and lining the alleys in a vibrant, festival-like crowd.

According to Choi, outdoors drinking offers better prospects for socializing.

“I think in Korea, it’s still difficult to mingle with strangers. But when you’re outside and not sitting at your own table, it’s less inhibiting.”

As to the more macro-level social reasons behind this trend, one of the key factors driving people outdoors has been the recent smoking ban, says pub owner Michael Fisher. A new law, which took effect starting from January 2015, prohibits indoors smoking in all public places including restaurants, cafes and bars.

“Since then, people have no choice but to step outside if they want a smoke. And naturally, they take their beer glasses with them,” said Fisher, who is the owner of Phillies pub, a Haebangchon hot spot for expatriates whose front doors are frequently lined with beer-swigging customers.

“It’s mostly the foreigners who drink outdoors,” Fisher observed. “I’m from Birmingham, England, and it’s a very commonplace thing there, as long as (the drinking) is done on the premises.”

So far, he has had no problems with the new fad.

“We make sure that customers don’t wander off beyond our pub’s stoops or balcony. And it’s only during a few months of the year anyway, when it’s warmer.”

Locals’ complaints filed to the Yongsan-gu District Office, however, tell a different story.

The noise from people either drinking outdoors or in open-walled beerhouses lining the upper hillside of Gyeongnidan has been stoking the ire of some neighbors, says Jung Eun-cheon, head of media relations at the office.

“When people are chatting outdoors or in the terrace area ... the noise really travels through the neighborhood,” Jung said. “We don’t get as many complaints as we used to, because Gyeongnidan locals have now gotten used to this kind of atmosphere. But among those who do complain, some have been pretty furious and persistent.”

On the other hand, residents in Haebangchon -- a neighborhood which has transformed into a trendy dining spot only in the past couple of years -- are still adjusting to their new cohabitants, said Baek Gyeong-ri, an official at Yongsan-gu Office’s health guidance division.

“It’s still a predominantly residential area,” said Baek. “That, of course, is one of the reasons why there are so many visitors. People are attracted to the quaint eateries buried between houses. But the residents that file complaints say their home lives are being disrupted by the constant chatter of people, all through the night.”

Such commotion that results from outdoor drinking, however, is difficult to contain, control or sanction, Jung says.

“Loud music is something we can stop via administrative measures,” he said. “But the sound of people talking does not fall under the category of ‘noise’ according to current regulations, so there’s very little we can do.”

In Korea, there are currently no regulations against drinking outdoors, unlike in some other countries such as Australia, Canada, Ireland and most states in the U.S. -- where such restrictive legislations are referred to as “open container laws.”

“There are clauses in Korea’s Minor Offenses Act that impose fines for causing alcohol-induced disturbances (such as violence or vandalism) in public places,” said attorney Lee Jong-soo. But drinking outdoors does not in itself constitute a crime or even a misdemeanor, he remarked.

A group of lawmakers are currently seeking to enact legislation that would prohibit drinking in outdoor areas including university campuses and parks. Some are in favor of heightened regulations; others fear such bans will excessively restrict both bar owners’ and bar hoppers’ freedoms.

Cho Na-young, a lawyer and avid traveler, cites cases of foreign backpackers’ unruliness in Southeast Asia when invoking the need for preventative measures in Korea.

“Some tourists seemed to really indulge in being free from the drinking bans of their own countries,” said Cho, recalling outdoor drinking scenes she saw in Laos. “I hope unruly street drinking can be monitored in Korea.”