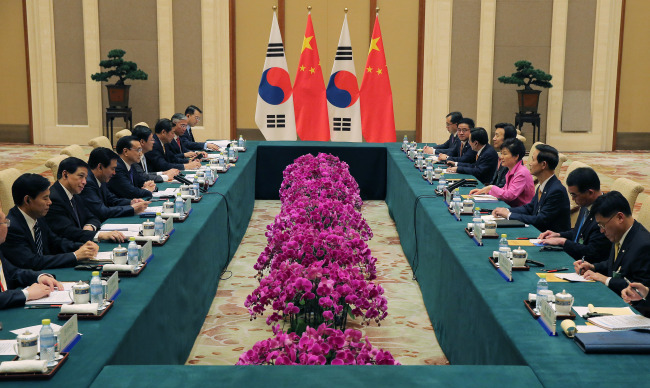 Park and Xi agreed during their summit talks in Beijing to hold the trilateral meeting at a "mutually convenient time, including at the end of October or the beginning of November, in South Korea," according to a statement by Cheong Wa Dae, Park's office.

The announcement was no major surprise as it was widely reported that South Korea -- as chair of the trilateral cooperation process -- was pushing to host the forum before the end of the year.

With the plan now made official, all three countries are expected to step up efforts to arrange the summit that was last held in May 2012.

China has been locked in a territorial dispute with Japan over control of the Senkaku Islets, among other issues, while South Korea has refused to hold a one-on-one summit with Japan unless Abe takes sincere steps to address the grievances of Korean women who were forced into sexual slavery for Japanese soldiers during World War II.

According to Cheong Wa Dae, Xi expressed thanks to Park for her "active efforts" to normalize trilateral cooperation.

For South Korea, a trilateral meeting will set the stage for a bilateral summit with Abe in a way that least offends South Koreans who still resent the neighboring country for its brutal colonial rule from 1910-45.

Seoul and Tokyo have come under growing pressure from Washington to mend fences as the U.S. seeks to bolster trilateral cooperation with its two Asian allies, in part to keep a rising China in check.

China's position on the trilateral summit had been more cautious until recently, indicating that Xi's consent may have been a result of South Korea's diplomatic efforts.

Experts noted a possible shift in the regional diplomatic landscape.

"The fact that South Korea-China ties are becoming closer than ever may mark the beginning of a new alignment in the current 'southern triangle' versus 'northern triangle' format," said a diplomatic source, who spoke on the condition of anonymity.

South Korea, U.S. and the Japan form the "southern triangle," while North Korea, China and Russia comprise the "northern triangle."

He stressed, however, that trilateral cooperation with the U.S. and Japan will remain the mechanism safeguarding South Korea.

On North Korea, arguably the most important agenda item in the Park-Xi talks, they reaffirmed their close partnerships.

They agreed to continue joint efforts for the resumption of "meaningful six-way talks" on the North's nuclear program, said Cheong Wa Dae. (Yonhap)