He has recently made the transition to online and mobile, and now believes that many more cartoonists and storytellers will follow suit as the print industry comes to an end.

"I think newspapers will disappear, but in a slower process than we think, because people still need valid information as opposed to, for instance, some kid writing an opinion on a blog," Mosher said in an interview.

"I am not an expert, but I get a sense like we all do in this business that print's days are numbered." 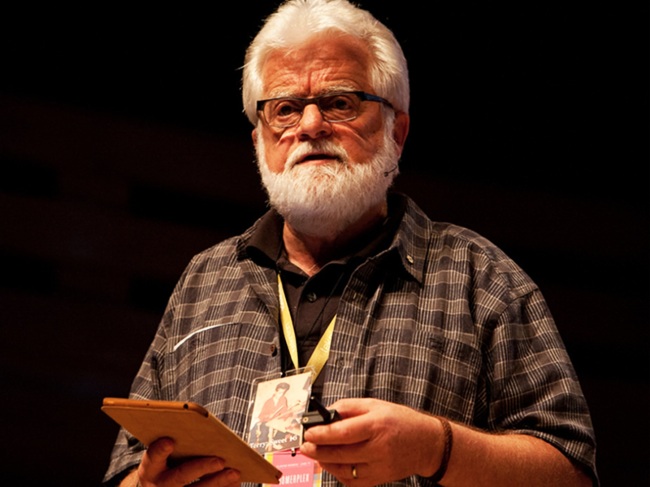 The nature of the message is still the same, but Mosher said the delivery has changed phenomenally from the old black and white print to now more people rapidly seeing cartoons and content online than in newspapers, he added.

He said that more and more will see print newspapers as an afterthought for an older generation of readers, and all editors will think in terms of delivering news online or via mobile platforms in a number of different ways.

Mosher visited Seoul for the first time to participate in a three-day cultural event hosted by the Corea Image Communication Institute. The cartoonist seeks to help Montreal become a sister city of Seoul, as the two cities share a lot of similarities.

He said the transition would further fuel demand for quality content, and the industry would be puzzling over how to do that and how to be able to pay for it.

"They will desperately need quality stuff," said Mosher, who draws cartoons under the pen name of Aislin, adding that the roles of cartoonists and writers will change as well.

"I am called now a content provider from a political cartoonist."

The media industries such as television, radio and newspaper will be contemplating whether to come together as one collective platform, and how to draw attention from consumers as a responsible media content provider.

Mosher was inducted into the Canadian Cartoonist's Hall of Fame in 2012.

He has been drawing political cartoons with a consistent theme, believing in decency and good in people.

"You can say I am a Confucian but with an attitude. I want politicians to be decent to their constituents," he said.

"I have expressed that in a radical and cheeky way."