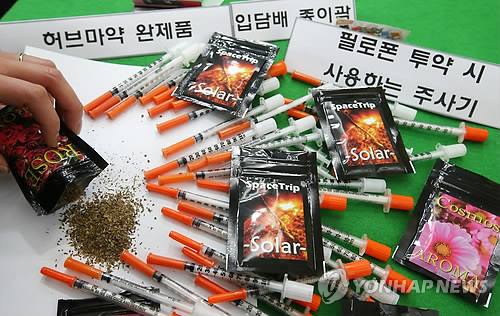 (Yonhap)
In the report submitted to Rep. Kim Jang-sil of the ruling Saenuri Party by the National Police Agency, the number of teenagers captured for taking drugs nearly tripled from 27 in 2012 to 75 last year.

The number for this year will likely hit a record high, with 65 having been nabbed by the police as of July.

A total of 210 juvenile offenders were caught taking or possessing drugs from 2012 to 2014, with 85 percent of them coming from Seoul and the surrounding Gyeonggi Province and Incheon.

During the same period, a total of 20,397 people were arrested for drug-related crimes.

The lawmaker Kim called for measures to crack down on drug sales and exchanges online, noting that the Internet has made it easier for the youth to acquire drugs.