[ The Korea Herald – Send E-mail ]
A river runs through Pyeongchang
Feel and see buckwheat blossoms bloom in tourist county
By 박형기
Published : Aug 31, 2015 - 16:21
Updated : Aug 31, 2015 - 16:22
PYEONGCHANG, Gwangwon Province -- The morning light reflects off the surface of the Pyeongchanggang River glittering with the sound of the flowing water echoing in the quiet atmosphere.

As the county’s main event -- a buckwheat blossom festival commemorating the 1930s writer Lee Hyo-seok -- is about to kick off this week attracting visitors to its vast field of white flowers, this river and its water valleys will also be filled with avid fly fishers. 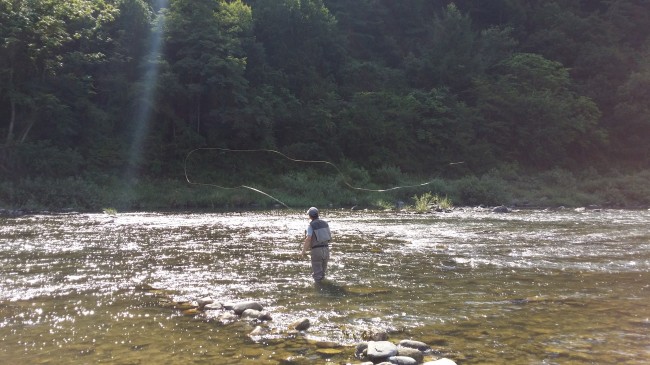 Fly fishing in Pyeongchang River (Park Hyong-ki/The Korea Herald)
There is something mystical, magical and romantic about fly fishing -- a sport of “catch and release” that takes both patience and physical endurance to cast, catch and let go of the fish that took the artificial bait.

Once clad in a full-body, waterproof wader inside the river water and casting the fishing rod back and forth toward the upstream surrounded by clean-air mountain surroundings, you will feel like Brad Pitt in “A River Runs Through It,” the 1992 movie directed by Robert Redford about life and fly fishing.

Pyeongchang began offering this experience of the “gentleman’s sport” that was introduced slightly before the Hollywood movie, which won the Oscar for Best Cinematography, spurred on the activity immediately following its theatrical release in Korea.

Water valleys linked with Pyeongchanggang River in Mitan-myeon is considered the favorite spot to fly fish here for trout, especially in the spring between March and June and in the fall between September and December.

It takes a day or two to practice casting, but months to master as it requires the skill to delicately and quietly land bait in front of fish swimming upstream. Also, it is physically challenging as you will have to come early in the morning when fish are most actively seeking food and have to trek an average of 4 kilometers to just find the right spot to fly fish.

But that is the beauty of fly fishing, which is currently being enjoyed by some 20,000 people in the country, from about a meager 800 about 10 years ago. Unfortunately, there are no rental shops anywhere in Korea to borrow waders or fly fishing rods, as this sport is for those seriously committed to doing it for the long haul with deep respect to the environment and natural resources. 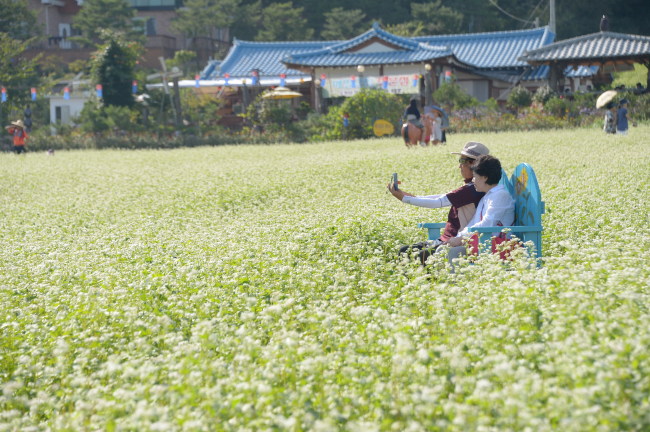 Tourists take a selfie in the field of buckwheat blossoms in Pyeongchang. (Lieto)
After about three hours of fly fishing, you can check out the county’s well-known buckwheat blossom field in Bongpyeong-myeon -- the hometown of writer Lee Hyo-seok, who was inspired by the flowers to write his famous 1936 short story “When Buckwheat Blossoms Bloom.” The flowers start to fully bloom in early September.

The Hyoseok Cultural Festival in the Lee Hyo-seok Culture Village, which was designated Korea’s first national cultural village in 1990, will be held for ten days from Sept. 4 to 13. For more information, visit www.hyoseok.com or call (033) 335-2323.

There are other sports and leisure activities you can enjoy nearby such as paragliding and a two-hour hiking path in the woods near Phoenix Park resort.