“With the rising interest in well-being and healthy leisure, the nationwide demand for sustainable green services has been on the increase,” a KFS official said.

According to the KFS data, about 85.8 percent of Korean citizens and 95.5 percent of experts expected the demand for urban green areas to continue to increase. 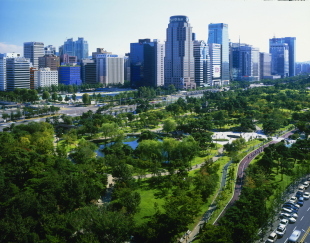 However, the dwindling government budget for urban green projects has fanned concerns that the state funding will fail to meet the ever-rising demand for environmental rights.

The KFS’ urban forestation operation takes full account of the Park Geun-hye administration’s “Government 3.0” slogan, which calls for enhanced communication through the spreading of information to the public.

As part of the ways to undo the informational divide between the government and the people in the afforestation sector, the KFS has broadened the communication channels to heed the people’s voice about green city policies. This includes strengthened cooperation with the civil organizations and the business enterprises that actively support corporate social responsibilities.

The KFS has encouraged many socially aware businesses to participate in the urban city-making operations. The state forest agency incentivizes corporate contributors by offering promotional opportunities, such as displaying corporate names and trademarks or setting up commemorative indicators in the contributed green zones. Another big step was the addition of urban forests and street trees to the government’s list of carbon-reducing businesses.

The KFS’ cooperation with civil organizations and citizen participants has also seized the eyes of urban administration experts. The KFS now has 20 operations of urban forest trusts that collect and manage voluntary donations for urban forestation.

The KFS has also organized many urban forest events to encourage urbanites in Korea to enjoy a green environment amid the busy bustle of their city lives.

Earlier in June 2014, “Bio Blitz,” an event for children and adults, successfully attracted about 4,000 visitors from across the country.

The “Saving the Bees Together” event of May 2013 also attracted 15 environmentally friendly operations, in which participants were encouraged to share their experiences and knowledge of living creatures through social network services. Internet-based environmental operations have been gaining support from a wide range of participants, the KFS said.

“We are confident that larger green space in the urban areas will contribute to enhancing people’s healthy lifestyles,” an KFS official said.

Lee Yong-seok, a director at the KFS, said that the “in-city forest” project is an exemplary case in forestry policies to show the government’s effort for openness, sharing and cooperation, and aims to expand green spaces in our residential areas.