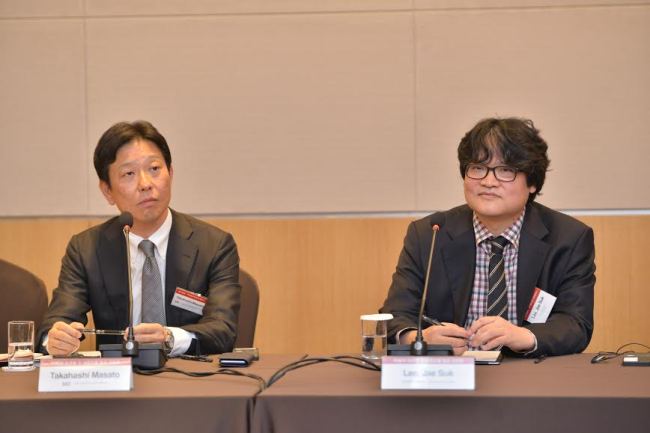 Takahashi Masato (left), managing executive officer at Rakuten Ichiba, and SimpleX CEO Lee Jae-suk speak at a press conference on Wednesday in Yeouido, Seoul. Cafe24
Online merchants in Korea will be allowed to sell their products on Japan’s Rakuten Inchiba without registering as local corporations.

They will also be given access to the use of local delivery system and payment tools.

The arrangements came in a deal between Rakuten Ichiba, the “B2B2C” arm of the largest online market in Japan, and local e-commerce host Cafe24, which has supported more than 75,000 online shopping malls for a decade in Korea. Rakuten Ichiba admits only Japan-based corporations, but will give special exemption to Cafe24-registered Korean vendors.

Lee projected that the new program would generate 100 billion won in sales within a year, based on the fact that about 20 percent of the e-commerce vendors working with Cafe24 aim at the Japanese market, which recorded 100 trillion won in trade volume last year.

“Rakuten has around 100 million members and the Rakuten Ichiba unit has seen an accumulated 266.9 million buyers as of 2014. The future is good,” he added.