There isn’t much variety to the words used to describe HyunA: All roads lead to “sexy.” 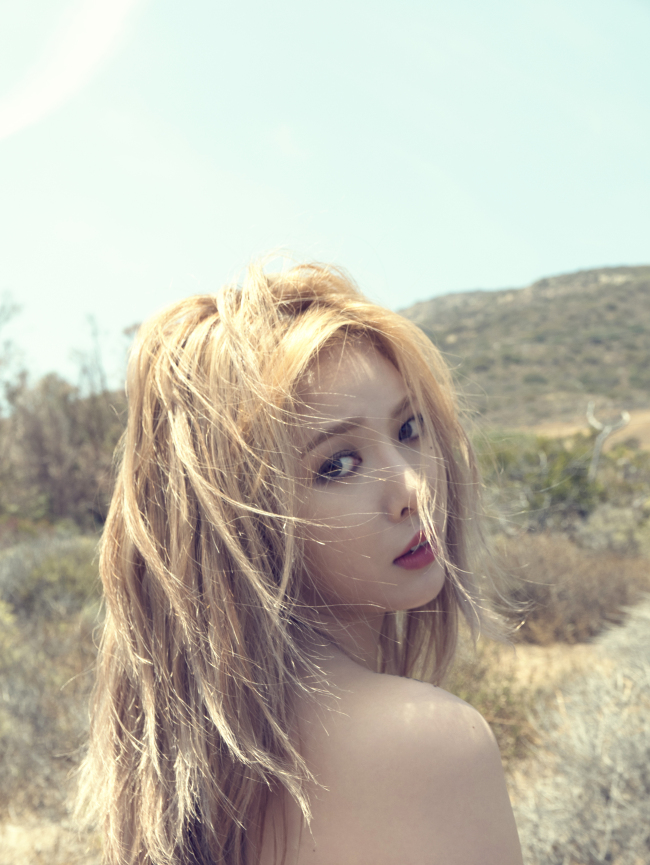 HyunA (Cube Entertainment)
That image of the 4minute member and solo singer who appeared in Psy‘s “Gangnam Style” music video remains alive and strong in her latest EP “A+,” which dropped Friday. Promotions for the EP started off with an adults-only trailer that showed the 23-year-old partying hard in Los Angeles, and the music video for the strutting lead track “Roll Deep“ is expected to follow in the same vein.

“I do worry that my concepts might be repetitive,” HyunA told reporters at a roundtable interview at CUBE Cafe in Seoul ahead of the EP’s release. “I think about that every time a new album comes out.”

Yet, she remains confident in her decision to stick to risque -- partly because, she says, she feels that the cute and innocent style wasn’t meant for her.

“I’m so bad at it,” she said, laughing. “It’s so awkward. I don’t think I’ll do well if I target that concept. And I don’t do anything that I’m not confident about.”

“If I hadn’t shot that trailer, and I hadn’t done something like ‘Red,’ maybe I could give it a try,” she continued, referring to her last solo release. “But I’ve come too far. This image wasn’t created overnight. It was built up, and upgraded. I can’t change it all now.”

Still, HyunA hopes that fans will see something beyond her steamy concept in this EP.

“I’m particularly nervous this time, because I’ve never played such a big part in creating a solo album,” she said. According to HyunA, she had a major voice in directing decisions -- giving ideas on all five tracks of the EP as well as the trailer video and album’s jacket photos.

“I especially paid attention to the visual performances on this album,” she said.

“I rewatched all of my past performance videos and I noticed that I’ve had equal numbers of male and female dancers,” she said. “This time, I put together a performance with only female dancers. There’s no particular central move in the choreography, but I picked up some swag hand motions while dance training in the U.S., so keep your eyes out for that.”

According to HyunA, her aim is to exude a healthy energetic vibe. “When the trailer came out, a lot of people called it racy, but that wasn’t my intent,” she said. “I want people to think of me as having a very healthy, energetic type of sexy feel, bouncy and fun.”

“Through this album’s promotions, I hope that I’ll find more people who like what I like,” she said when asked about her goal with the new EP. “I titled it ‘A+’ because I want people to tell me I did a good job and share in the things I love, without everything being clouded by the provocative elements.”