President Park Geun-hye will visit China for a three-day trip to attend celebrations to mark the end of World War II early next month, a decision seen as part of South Korea’s efforts for a diplomatic balance amid an intensifying rivalry between Beijing and Washington.

Cheong Wa Dae, however, has not yet decided whether Park would attend the military parade that will form the centerpiece of the day’s events.

“We are still reviewing the matter of attending the parade. As of now nothing has been decided,” Ju said. 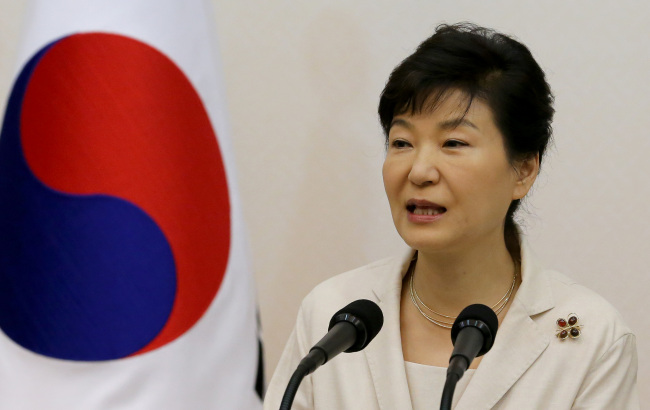 On Sept. 3, China plans to hold the 70th anniversary of its victory, widely seen as a showcase of its growing military strength and its attempt to highlight Japan’s surrender in the war.

China has invited world leaders to attend the event, including a rare military parade. Many Western leaders, however, remain reluctant for concerns of the event further stoking Beijing’s rivalry with Japan. Park’s top aide on foreign affairs said that he did not know whether Japanese leader Shinzo Abe would attend the end-of-WWII event.

Cheong Wa Dae was not particularly aware of any movements from North Korea as to whether the reclusive regime will send a special envoy, he said.

Park is the first leader of a U.S.-allied country to make an official announcement to attend the Beijing ceremony.

Experts view that Seoul confirming Park’s attendance to the events would further strengthen the bilateral relationship between South Korea and China both on geopolitical and economic terms.

During her stay in Beijing, the South Korean president is highly likely to hold a summit with her Chinese counterpart, Ju said. After the event, Park will fly to Shanghai to visit the old headquarters of the Korean Provisional Government for its reopening, he added.

“South Korea has various agendas that need to be discussed with China, including North Korea and its nuclear ambition, the trilateral summit among South Korea, China and Japan and the China-led Asian bank initiative,” he said.

But Park appears to have struggled in making the decision at the last minute.

The announcement came amid speculations that the U.S. had requested Park skip the ceremony with the position that her attendance would send a false message to the world that China has caused a rift in the U.S.-South Korea alliance. Both Cheong Wa Dae and the White House denied the reports.

Seoul’s decision appears to have been made with a larger picture in mind to push Beijing to exercise its clout to curb North Korea’s nuclear ambitions. Seoul has been seeing a growing need for regional diplomacy at a crucial time when the two Koreas are facing growing military tension.

Military tension between two Koreas sharply rose Thursday afternoon as they exchanged fire on the western frontline, following a land mine attack earlier this month.

Park’s visit to Beijing and her planned summit with U.S. President Barack Obama in mid-October would give her fresh momentum to bring back the global attention to stalled talks on Pyongyang’s nuclear ambition, experts said.

“The remaining months of the year will offer Park the last opportunity to find a breakthrough for North Korea’s nuclear development on a global level,” said Park Won-gon, a security expert at Handong Global University.

“South Korea must seize a leadership role this time in reinitiating talks on North Korea within the year before the U.S. presidential election campaign begins next year as well as South Korea’s general elections.”