A former presidential secretary reportedly claimed Wednesday that it was President Park Geun-hye’s former top aide who ordered him to conduct an internal investigation of a rumor, which later grew into the infamous “Cheong Wa Dae document leak scandal.”

Cho Eung-cheon, a former Blue House secretary for civil discipline, said that the leaked documents were written after former Chief of Staff Kim Ki-choon gave a direct order to probe the rumors that Park was about to “sack him” in local vernacular that daily Segye Ilbo reported.

“The documents were written based on findings of an investigation ordered by Chief of Staff Kim because he wanted to find out who was spreading rumors that he was likely to be replaced.” Cho was quoted as saying by the newspaper. The remarks came during a trial of the former secretary -- on charges of leaking official secrets and violating the presidential records management law. 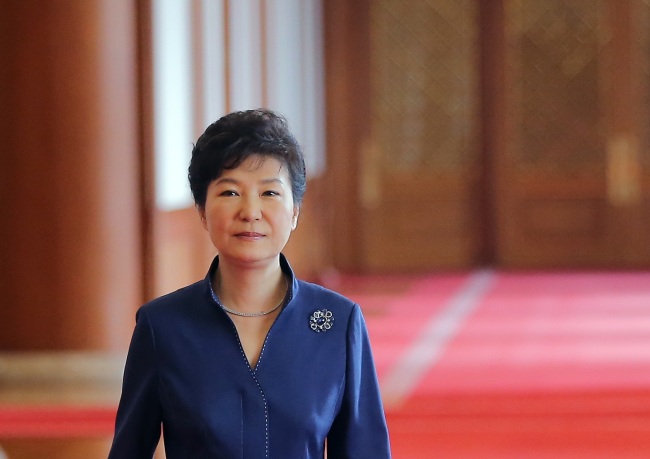 President Park Geun-hye (Yonhap)
Cho further argued that although he was acting on Kim’s orders, the presidential office put the blame on him for gathering and writing false facts and leaking confidential files to his benefit. Kim has denied the allegations.

The leaked presidential documents took center stage late last year after the confidential reports were exposed to the public.

The documents suggested that Chung Yoon-hoi, Park’s former aide, colluded with presidential aides and meddled in state affairs by forming a secret group. Chung was Park’s chief of staff when she entered politics in the late 1990s.

Cho also reportedly testified in court that he had delivered memos to the president’s younger brother Park Ji-man to warn him when it was deemed he was meeting people with ill intentions.

“I verbally warned Park Ji-man and his wife not to meet people who approached him with bad intentions, but he did not listen. So I gave him a memo that carried brief profiles of those people and their reputations,” he said. Cho also said that his direct boss, the former senior presidential secretary for civil affairs, also knew about the memo, which was later identified as part of the leaked confidential information.

Cho’s claims contradicted the prosecution’s conclusion earlier this year that he was behind the fabrication of the documents and delivered them to Park’s brother.

Prosecutors said in an interim report in January that Cho, while serving at the presidential office in 2013 and early 2014, ordered Park Gwan-cheon, the police officer who worked for him, to deliver 17 presidential documents to the president’s brother. They added that the contents of the document specifying Chung’s role was false and based on unverified information.