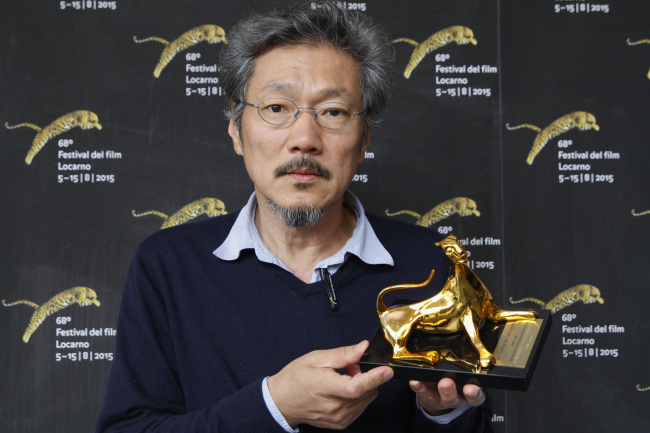 Hong Sang-soo at Locarno (Locarno International Film Festival)
In addition to the top prize, the film also picked up a Best Actor award for leading man Jung Jae-young. He is the first male Korean actor to win that honor at Locarno; actress Kim Ho-jung took home the best actress award in 2001 for her performance in “Nabi.”

The Korean film is only the second to win the Pardo d’oro (Golden Leopard) after “Why Has Bodhi-Dharma Left for the East?” from Bae Yong-kyun, who won the award in 1989. Meanwhile, Hong Sang-soo had taken home the Best Director award at the Swiss festival two years ago for “Our Sunhi.”

“Right Now, Wrong Then” is a romance film with a double structure revolving around film director Chun-su (Jung Jae-young) and an artist named Hee-jung (Kim Min-hee). Their brief romantic encounter is depicted twice, but with different outcomes.

The film, which will also be screened at the Toronto International Film Festival and the New York Film Festival, is slated to be released in local theaters in September.