[ The Korea Herald – Send E-mail ]
Obesity emerges as major health threat in South Korea
Obesity most prevalent among Korean men in their 20s and 30s
By 이다영
Published : Aug 13, 2015 - 17:57
Updated : Aug 13, 2015 - 18:35
Kim Ji-hun, a 32-year-old former journalist, gained 12 kilograms in six months after starting to work for a local magazine in 2013. During his years as a reporter, he would drink more than five days a week with his sources and skip his breakfasts almost every day. He was overweight and sleep-deprived.

“You are too tired the next morning and don’t have the time to have breakfast however hungry you are. And I’d always eat too much during lunch because I didn’t get to eat anything in the morning. And then I’d drink at night. This cycle continued for more than two years.”

Kim, who is currently planning to start his own business, lost 12 kilograms after quitting his reporting job in December last year. Surprisingly, he never exercised even after leaving the magazine. Instead, he quit drinking and started eating three times a day. He slept well. “It’s all about doing the basic things right,” he said.

Men in their 20s and 30s are the category in Korea with the highest rate of obesity, which can lead to other serious illnesses such as diabetes and heart disease. 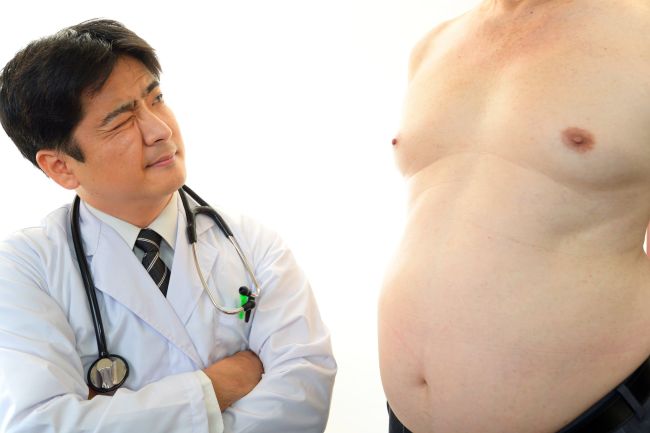 Men in their 20s and 30s are the category in South Korea with the highest rate of obesity. (123RF)
Obesity has emerged as a major health threat in Korea in recent years. According to a study released by the National Health Insurance Service on Thursday, the number of obese Koreans -- those with a BMI of 30 or above -- accounted for 4.2 percent of the entire population in 2012, up from 2.5 percent in 2002.

One in 17 South Koreans will be obese in 2025 if the current trend continues, the report said.

Koreans spent 2.7 trillion won ($2.65 billion) on treating obesity and obesity-related diseases in 2011. The cost accounted for 5.8 percent of the entire medical bills that year. In 2007, however, only 1.9 trillion won was spent in total on the health condition.

The national health insurance agency predicts that some 7 trillion won would be needed to treat obese patients in 2025, if the current trend continues.

As of 2013, 32.4 percent of adult Koreans were overweight, meaning their BMI was between 25 and 30. The number of overweight Koreans has increased 60 percent in the past decade, according to the Health Ministry.

The NHIS last year formed a special task force to combat obesity to prevent other health complications such as heart disease and diabetes that can lead to a serious economic burden.
Excessive alcohol intake, job-related stress and physical inactivity are considered key contributing factors for obesity. Korea is notorious for its culture of binge drinking. In a last year report released by Euromonitor, a London-based market intelligence firm, Koreans were said to drink 13.7 shots of liquor per week on average. This makes them the heaviest drinkers in the world, beating Russians and Thais, according to the study.

In 2011, health expenditures on alcohol-related diseases totaled 2.43 trillion won in Korea, which made up 6.5 percent of all medical expenditures here.

Park Jin-woo, a 30-year-old professional working for a big firm, has gained seven kilograms since being employed in 2010. He works about 9 hours a day sitting at his desk, six days a week and finds it hard to find time to exercise. He is often obligated to drink with his senior colleagues at work. His BMI is currently 25.

“I’m not surprised about my weight gain,” he said. “Most of my friends in their 30s have the same problem.” 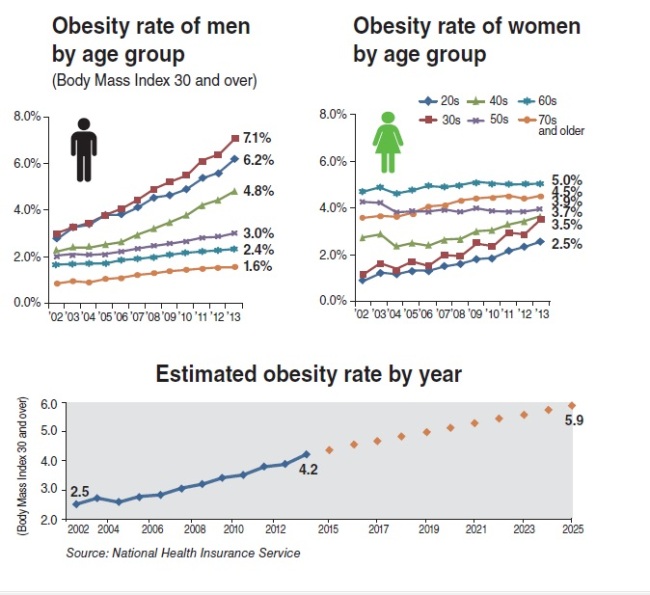 Meanwhile, the number of obese Koreans who belong to the wealthiest 17 percent accounted for 3.6 percent of the population in 2013. Back in 2002, they made up 2.3 percent of all Koreans.

Overseas studies have shown that limited resources and lack of access to healthy, affordable food and high levels of stress make those with low-income vulnerable to obesity.

A 2012 American research published in the Journal of Academy of Nutrition and Diabetics claimed that stress from job-related demands and difficulty paying bills is related to obesity in teenagers and adults.

South Korea’s youth unemployment reached the highest this year since 2000, with some 410,000 young Koreans in their 20s not in school and out of work as of June.