“I trained about 40 women who wished to be manicurists for about a month,” Lee told The Korea Herald.

“I had an interpreter with me throughout all of the classes, but sometimes I didn’t really need to explain anything verbally because they already knew what to do. They were all very determined.”

Ironically, labor policies for women hasn’t been Seoul’s forte; Korea has the highest wage gap by gender among the Organization for Economic Cooperation and Development nations. The employment rate for women in Korea in 2013, which stood at 53.9 percent, was in fact much lower than that in Vietnam in the same year -- 72 percent.

According to a report last year by the World Economic Forum, Korea ranked 117th out of 142 countries on gender parity, below all of the OECD nations except Turkey. 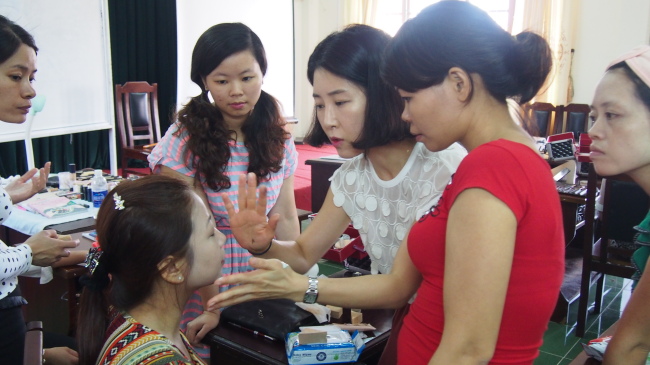 Vietnamese female job seekers learn makeup skills in a job training center run and financed by Korea’s Ministry of Gender Equality and Family. (Ministry of Gender Equality and Family).
Regardless, its gender equality project in Vietnam -- which mainly consists of offering job training programs for unemployed women -- has benefitted some 2,972 Vietnamese women since 2011 in hopes of offering more specialized fields of jobs. Among the women who received free job training, 1,239 were employed as manicurists, makeup artists and even started their own businesses as handicraft artists.

“The second largest number of women immigrants residing in Korea are from Vietnam, following those from China,” said Oh Min-ok from the ministry in Seoul. “This certainly has played as one of the factors when we made our decision to launch this project there.”

Korea’s Gender Equality Ministry currently runs and supports three job training centers in three different regions in Vietnam -- Quang Nam, Thai Binh and Can Tho. Starting this August, the centers are introducing new classes with different skills, including graphic design, retail strategy and cleaning. Textbooks gathering the centers’ four years of work will be published as well. All of the courses are either taught by Koreans who are experts in the specific job skills, including makeup or nail care, or locals who have been trained by Koreans to teach the classes.

“All of the three centers are located in relatively remote regions. We are dealing with women who are not living in the cities and don’t have a lot of resources when seeking employment,” said Huh Hye-young, who currently works in Vietnam at the centers. She has been serving there since 2012.

“Many of them work in farms owned by their families, but they are often out of work when there is no help needed. The purpose is to train them with skills that can eventually lead to possible employment, regardless of where they live.”

One of the most popular classes has been nail art training. Because of Vietnam’s warm weather, manicure and pedicure services are becoming increasingly popular in the country, according to Huh.

Although all of the training programs offered at the centers are free, not everyone who wishes to participate can take the classes. Every applicant has to go through an interview process in order to be selected.

“Once, too many applied to take classes on nail art, so only about 50 percent of those who signed up were selected to participate,” said Huh.

In spite of its high labor force participation rate of women, Vietnam was one of the few countries in the world where the gender pay gap actually widened in 2012-2013, according to International Labor Organization reports. Korea’s gender pay gap also still stands high, higher than the one in Vietnam. Korean women were paid 37.4 percent less than their male counterparts in 2012, while Vietnamese women made about 20 to 30 percent less than men in 2013.

Studies by the World Bank show that women’s high employment participation in lower income countries derives from the fact that individuals cannot survive without working. The quality of the women’s work, therefore, usually remains poor, as they are often hired by their own family members for agricultural work, and are often unpaid for their labor.

On the other hand, the reports pointed out that developed nations with high labor participation rate of women have extensive social protection coverage and are societies where part-time work is possible and accepted. Korea is also striving to reach such a level, as the country is still without a state-run unemployment assistance program and has among the longest work hours of the OECD nations. Most temporary workers are also not entitled to full-time benefits.

Manicurist Lee said skills are what can lead to a woman’s independence, which also leads to dignity. Among students at the centers was Nguyen Thi Thau, a 29-year-old with a speech impairment, who had been struggling with job prospects because of her disability. After completing her courses in nail art, which she excelled in, she was soon hired by a local beauty salon.

“Many of the women I taught are also working as home-visiting manicurists,” she said.