[ The Korea Herald – Send E-mail ]
Seoul to launch high-end taxi hailer
City’s own version of ‘Uber’ criticized as being self-contradictory
By 옥현주
Published : Jul 29, 2015 - 18:18
Updated : Jul 30, 2015 - 00:50
Seoul city announced Wednesday the launch of a premium taxi-hailing service in October as a pilot measure toward legalizing such a service and as an alternative to popular yet illegal reserved cab services such as Uber.

The Seoul Metropolitan Government said it would put 30 taxis into a trial operation in partnership with HIGH&, a taxi operator jointly invested in by the municipality and Seoul Taxi Association. Some 50 drivers will be recruited through HIGH& to drive the selected cabs.

The vehicles with an engine capacity of 2800 cubic centimeters or larger can operate as a “luxurious taxi” after they apply for a permit from the city government. 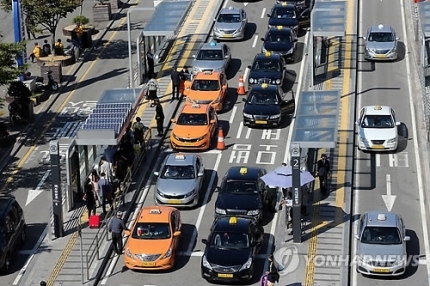 (Yonhap)
The move comes in line with the latest bid by the Ministry of Land, Infrastructure and Transport to ease regulations on the operation of luxury taxis.

Currently, the law requires vehicles to retain at least an engine capacity of 3000 cc, restricting the types of cars that can run as high-end cabs.

Korea already has luxury cabs licensed to drive across the nation, but they are required to charge customers through a meter and carry taxi signs like any other regular taxi.

But the new premium cab-hiring system gives more leeway to drivers and operators, not requiring them to bear taxi signs or run on the meter system. The cabs will look like a regular car except that their license plates should be yellow.

It will also allow them to freely set the prices. The starting taxi fare will be likely set at around 7,500 won ($6.50) to 8,500 won, 1.5 to 1.7 times higher than that of current high-end taxis, according to an official from the Seoul government.

The vehicles will not roam the city to find passengers like traditional cabs, but will only be hired by those making a reservation in advance.

An official from Seoul Taxi Association told The Korea Herald that it expects the system to improve labor conditions for cab drivers suffering from low income and punishing working hours.

Those driving luxury cabs will receive a salary, which will be higher than the average monthly wage for regular taxi drivers, amounting to about 2.1 million won.

The move comes as the city saw a growing number of high-end car services illegally operated by individuals, especially at nighttime, and a high demand for taxi-hiring services such as Uber, which the city called “illegal.”

“The new scheme was designed to legalize the operation of premium taxis to help the taxi industry and protect citizens,” an official from the city government told The Korea Herald.

“Unlike the current premium taxi service, the city will promote fair competition in the private sector to offer the high-quality service to passengers,” he added.

But some members of the public have voiced concerns over Seoul’s plan, accusing the municipality of being self-contradictory.

“Seoul City launched its own version of Uber while it blocked the global taxi-hiring app from doing business here,” Ahn Jin-gul, a secretary general for People’s Solidarity for Participatory Democracy, told The Korea Herald.

Seoul banned Uber from operating here, imposing a penalty on those illegally running taxis through the app without cab drivers’ licenses as well as passengers using the system.

The difference between Uber service and Seoul government’s proposal is that those seeking to run high-end taxis should hold taxi driver’s licenses to be granted a permit.

The civic activist said that Seoul City’s new system could pose a threat to taxi drivers as competition to find passengers would intensify in the already maturing industry.

The plan to adopt a higher rate than ever for the luxurious taxis also opens up the possibility of an increase in overall taxi fares, dealing a blow to Seoul citizens, Ahn pointed out.

“The plan needs a more thorough review and consensus from relevant parties,” he said, adding that it is premature to introduce the system.

The Seoul City official, however, shrugged off the concerns.

“It is a matter of choice for both consumers and drivers,” he said, adding that it will leave the system to work in accordance with the principle of the “market economy.”

“Not all Koreans would use the high-end taxi system, which means drivers and operators should take their own risks,” he said. “The price and the number of taxis will be decided upon demand.”

The official said that there are already some drivers considering applying for a permit to operate their taxis under the new scheme, adding that taxi drivers seem to welcome the new system.