[ The Korea Herald – Send E-mail ]
Youth unemployment rate in Korea reaches highest in 15 years
By 이다영
Published : Jul 26, 2015 - 17:51
Updated : Jul 26, 2015 - 18:01
Park Jin-hyung, a 28-year-old university graduate, feels more anxious than ever before. He has just finished his second internship at a big firm, with no full-time job lined up. Park, who holds a double degree in business and international relations, has applied to about 60 companies since January, but was only interviewed by three firms that eventually did not offer him any positions.

“I spent an extra year after graduating high school to write my college entrance exam again, and I spent two years in the military,” Park told The Korea Herald.

“I also took a year or two during my university years to travel the world and study for the bar exam, which I eventually gave up. I regret taking those years off now because I feel I’m falling behind everyone else.”

Park is one of some 410,000 young South Koreans in their 20s who are not in school and out of work as of June this year, according to Statistics Korea on Sunday. 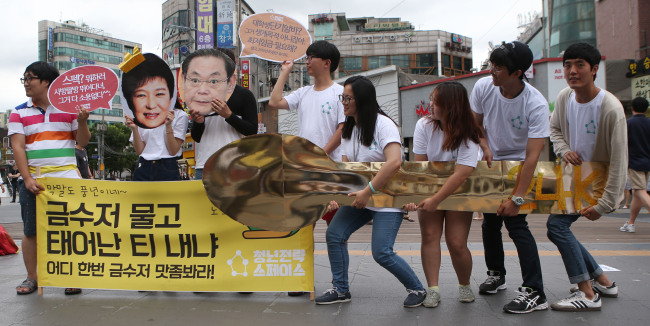 Young Koreans in Seoul protest against the government’s labor policies for the nation’s youth population, using a large, gold-colored spoon to criticize politicians and businessmen with prosperous backgrounds and therefore "never experienced the difficulties faced by young job seekers today.” In the Korean language, someone born into a wealthy family is said to have “been born with a gold spoon in his or her mouth.” (Yonhap)
The nation’s youth unemployment reached the highest this year since 2000, raising serious concerns about the government’s labor policies especially for the country’s younger population, as well as the limited job security among young contract workers.

The number of unemployed young Koreans, which stood at 330,000 back in 2013, rose to 380,000 last year, and reached 410,000 in the first half of this year. This is the second consecutive year for the youth unemployment rate to peak since 2000 -- when the country was still reeling from the aftermaths of the 1997 Asian financial crisis.

The statistics show that the government’s efforts to tackle youth unemployment have not been effective so far. The Ministry of Labor and Employment allocated 1.5 trillion won ($1.3 billion) this year for projects to combat youth unemployment, with some 40 policies -- including special programs for those who wish to seek employment overseas and free mentorship service -- specifically aiming to support young job seekers.

In an effort to fight the low employment among the younger people, the ministry even formed a special task force in June to help them find positions or opportunities that match their skills or draw on their formal job training or education.

Kim Soo-hyun, a researcher at the Seoul Institute, said the Asian financial crisis had a long-lasting impact on Korea’s job market.

“As the market became unpredictable after the crisis, more companies preferred to hire contract workers with previous job experience over young, full-time workers for entry positions, who are difficult to dismiss even if the business goes down,” he wrote in his study on youth unemployment published last year.

Kim Gwang-seok, a researcher at Hyundai Research Institute, also said the lack of full-time positions among young workers is linked to the high youth unemployment rate.

According to Statistics Korea, 34.8 percent of Koreans aged 15-29 started their career with a contractual position as of May, meaning one-third of young Koreans participate in the workforce for the first time with a limited job security. Among them, 19.6 percent said their first job’s contract was less than a year.

Part-time job opportunities have worked to spike the employment rate for the time being.

According to the statistics, the number of Koreans in their 20s who were newly employed in fact increased by 56,000 last year from 2013.

But according to lawmaker Chung Se-kyun from the main opposition New Politics Alliance for Democracy, the situation poses a more long-term problem on the whole, saying that the number of young Koreans aged 15-29 who are out of work would reach 1.16 million, if the statistics include those who “gave up” work, and those who are not actively seeking employment at all.

Researcher Kim had a similar outlook.

“If the number of contract positions increase while the full-time positions don’t, it will eventually increase the unemployment rate later on.

“It’s because once the contract ends, the worker has to endure another period of unemployment until he or she finds a job,” Kim said.

“Increasing number of contract jobs may raise the employment rate temporarily,” he wrote. “But in the long run, it can’t really be a solution to the essence of the problem. The limited job security among the young population is linked to many other social problems, including the rise of single households and low fertility rate.”

Kim also suggested regulating the nation’s work hours -- it’s the longest among the OECD nations -- and introducing a state-run unemployment assistance program, which is currently nonexistent in Korea, could help tackle the problem.

A separate survey by Statistics Korea also showed last week that a majority of the jobseekers tend to concentrate on similar positions.

According to the survey, a total of 633,000 aged between 15 and 29 as of May this year were preparing for jobs. Of them, 34.9 percent said they were getting ready to become public servants, a rise of 6.9 percentage points from the previous year.

Only 18.9 percent said they were looking for jobs in companies, meaning less than two out of 10 youths were willing to enter the business sector.