”I was baffled to see a list of Konglish names including ‘Luxtige,’ ‘Blesstige,’ ‘Tristige’ and ‘Forestige,’” Yu said. Konglish is a term coined by Koreans through combinations of English words or applying a new meaning for the usage of a common English word. “Handphone,” for “cell phone,” is one common example.

The letter was sent by the developer, mainly composed of the union of apartment home owners and the builder Samsung C&T.

Luxtige is a combination of “luxury” and “prestige,” intended to exude the apartment’s upscale, high-end image. The rest mix the word “prestige” with “bless,” “trinity,” and “forest.” 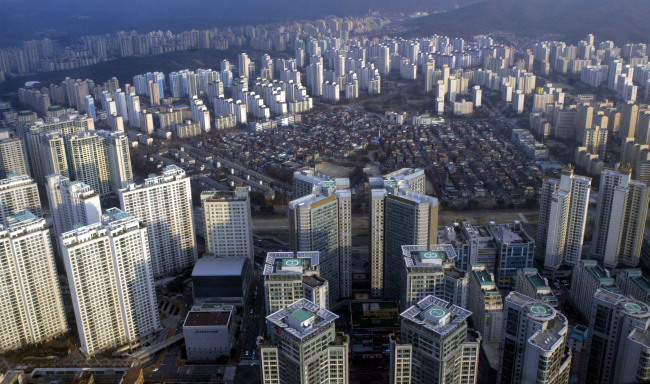 “The target residents and buyers of the apartment have high intellectual level,” the builder explained in the letter, adding that the proposed names will help enhance its luxurious, premium brand image.

Yu, however, said this rather makes the name difficult to remember and doesn’t appeal to younger generations, who will become the main consumers of apartments in the future.

GS’ Xi in Banpo, one of the highest priced apartment complexes in Seoul, has become the epitome of an upscale apartment with its name including the name of the expensive area and Xi -- a combination of “extra” and “intelligence” -- adding to that high-class image.

The Ricenz apartment in Jamsil, Seoul, stands for “River,” “Center” and “Zenith,” meaning it is the best apartment located by the center of the Hangang River.

“Names that sound complicated and yet have a luxurious image have always appealed to those in their 50s and 60s, who are the leading consumers of apartments here,” Park Hee-kyong, a real estate agent in Seocho, Seoul, said.

Some apartment names have up to 13 syllables in Korean.

“Some say jokingly that the names are getting longer and more complicated to make female residents’ mother-in-laws have difficulty in finding the apartments and barging into their home,” the real estate agent said.

“But such names have proved that they play a vital role in influencing the consumer purchase decision in Korea, and the trend is likely to continue,” she added.