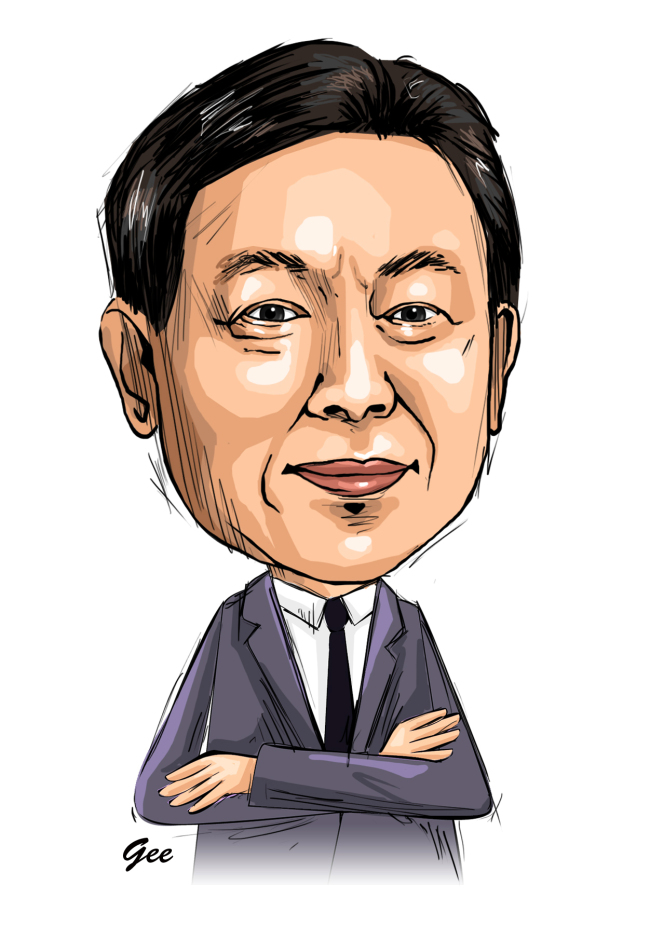 At the age of 60, Lotte Korea chairman Shin Dong-bin finally achieved his desire of getting a full grip of Lotte in Japan.

Lotte Holdings of Japan announced last Thursday that the board of directors unanimously agreed to name him the company’s president.

Now Lotte Holdings has three presidents -- Shin Dong-bin, his father and Lotte founder Shin Kyuk-ho and Japanese CEO Tsukuda Takayuki. But there is little doubt that Shin has overall control of the firm.

In March, Tsukuda was seen “bowing politely” to him at a Lotte Group meeting in Vietnam and saying, “One Lotte, one leader,” hinting at his support.

Having Lotte Holdings under his belt is imperative in gaining control of both Lotte groups in Korea and Japan, spanning across Asia and the U.S., because Lotte Holdings is the apparent control tower of governance.

Lotte Holdings has 37 affiliates and they together reportedly own 99.28 percent stake in Hotel Lotte in Korea, which is the de facto holding company of Lotte Korea.

Shin acknowledged this very point at the board meeting on the day, by reportedly saying, “I will take general chairman Shin Kyuk-ho’s mission and take responsibility of both Lotte groups in Korea and Japan as a leader.”

The reason for Shin’s appointment is quite clear: His father who is still very much hands-on in business affairs at the age of 94, wants to boost Lotte’s business in Japan equivalent to its success in Korea.

Since taking over Lotte operations as a senior manager in 2004, Shin led Lotte to become the fifth-largest business conglomerate by assets in Korea. The number of Lotte affiliates soared from 36 to 76 through aggressive mergers and acquisitions as of 2015, with sales jumping from 23 trillion won ($20 billion) to 83 trillion won as of 2013. This is in stark contrast to Lotte Japan’s 5.7 trillion won in sales in 2013.

Known as a risk taker, Shin recently tied up many successful business ventures.

Lotte acquired rent-a-car company KT Rental and bought New York Palace Hotel in Manhattan for $805 million. The establishment of Lotte Rental is said to have paved the way for the company to advance into the automotive and financial services industry, with the company now eyeing an Audi dealership. The acquisition of the high-end New York hotel is expected to help Lotte stretch to the upscale services industry in the U.S.

“Shin Kyuk-ho’s sign is quite clear. He wants his second son, instead of the eldest son Dong-joo, to take over both companies for sales. He has been encouraging this fraternal competition for quite a while and has finally made up his mind,” a Lotte insider said.

Shin has already got off to a start in consolidating the business empire. His right-hand man Hwang Kak-kyu has reportedly started renewing the “Vision 2018” that he proclaimed in 2009. The manifesto notes that Lotte Group will become one of Asia’s top 10 global brands with 200 trillion won in sales by 2018.

The main revision will be to focus on four key industries of the group -- duty-free shopping, hotels, chemicals and finance -- and increase their synergy with their sister companies in Japan, pundits said. “Because Lotte Japan’s business mainly relies on the food and confectionary, tourism and services industries, the work will be very difficult,” he said.

News outlet The Bell suggested that Lotte Chilsung Beverages is likely to the top priority for collaboration as Lotte Confectionary Japan does not sell drinks. “Before, the two companies would go as far as to arrange wholesales, but now they can really sell Lotte Chilsung beverages in Japan,” the news article quoted an insider as saying.

But is this the end of the inheritance game? Some suggest it isn’t.

Before Shin’s reign, his elder brother Dong-joo was the president of Lotte Holdings and therefore crown prince of the business empire.

Rumors of the sibling rivalry started to spiral in 2014 when both brothers started buying stocks of Lotte Confectionary, which is at the pinnacle of the group’s governance. Speculation had it that Dong-joo was vying to get hold of the Korean business.

However, Dong-joo visibly fell behind the fraternal competition when he was sacked from executive positions of Lotte affiliates from December last year, including his presidency of Lotte Holdings, and had everyone’s tongue wagging that their father may have finally made a pick.

Nevertheless, Dong-joo owns a substantial amount of shares of Lotte affiliates in both Japan and Korea, reportedly equivalent to that of Shin. Should their father choose to equally split his shares between them, there are always possibilities of another competition, observers said.

“Because Dong-joo is such an obedient son, he will put up with his father’s decision for now, but once the father passes away, who knows?” a market watcher was quoted as saying.