[ The Korea Herald – Send E-mail ]
[Herald Interview] Only the beginning for Korea’s migrant workers’ labor movement
Head of Korea’s first migrants’ trade union says the historic ruling is not the end of their journey for equal rights
By 옥현주
Published : Jul 21, 2015 - 15:16
Updated : Jul 29, 2015 - 18:48
When South Korea’s highest court recently made a ruling that migrants working in Korea illegally could establish a labor union, Udaya Rai, a head of the nation’s first migrants’ labor union, broke into a wide smile.

The historic ruling came on June 25, more than 10 years after the Seoul-Gyeonggi-Incheon Migrants’ Trade Union launched a battle against the Korean government to win legal status.

“I was so delighted when I heard that the court finally legalized our union,” said Rai, head of the MTU, during an interview with The Korea Herald in his office in Seoul last week.

“The victory is solely a result of the MTU’s years-long fight against the government to earn equal rights for migrant laborers here,” the 44-year-old Nepali said in fluent Korean.

The Supreme Court invalidated the Ministry of Employment and Labor’s ban on the union’s establishment, saying that people are entitled to basic workers’ rights to join and set up a trade union regardless of their immigration status. 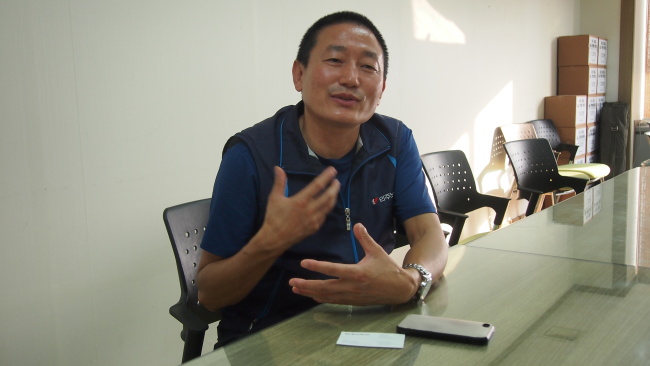 Udaya Rai, president of the Seoul-Gyeonggi-Incheon Migrants’ Trade Union, speaks in an interview with The Korea Herald in Seoul. (Ock Hyun-ju/The Korea Herald)
But the achievement didn’t come easy.

In 2005, 91 foreign workers who led a sit-in protest in central Seoul from 2003 to 2004 to call for a stop to deportation of people working here illegally, founded the MTU and requested a permit from the government for its establishment.

But the Ministry of Employment and Labor rejected its application, taking issue with the majority of the union members being “illegal” workers.

“How can human beings be illegal?” Rai asked. “We were just unregistered, not illegal, and demanded our fair share of rights.”

The MTU filed a lawsuit the same year. The lowest court ruled in favor of the ministry, saying that migrant workers illegally staying in the nation are not entitled to legal protection. But the appeals court overturned the decision in 2007, recognizing their rights as workers stipulated in the Constitution.

The ministry appealed, but the case was stalled in the Supreme Court for nearly eight years. During that period, six MTU officials, including two presidents, were deported for their involvement in the labor movement.

Last year, Rai officially became president of the MTU, which has some 1,100 members, replacing Michel Caturia, who left Korea for the Philippines in 2012.

Now, the MTU has become the voice for some 553,000 migrant workers legally on the EPS visa and 208,778 people who are in the country illegally, mostly from Southeast and Central Asia.

“When I started to work in Korea, it was common for foreign workers to suffer overdue payment, punishing working hours, beatings and discrimination,” he said. “It was wrong and I wanted to fight for their rights.”

Rai, who used to farm in Nepal, made his way to Korea in 2003 under the Industrial Trainee System in search of a better life for him and his family.

But the reality turned out not to be as expected.

The Nepalese activist started to work as a trainee at a small manufacturing factory just outside Seoul in 2004, working 11 hours a day, except Sundays.

After his Korean colleagues left work, Rai and other migrant laborers were forced to stay longer to clean up, only to receive 500,000 won ($430) four months later.

“When I questioned my boss about such unfair treatment, he beat me and verbally abused me,” Rai said.

He said that he had to flee several times from workplaces to escape inhumane working conditions.

Korea started to receive migrant workers under the Industrial Trainee System in 1993 amid a shortage of low-skilled workers for the so-called “3-D” jobs -- dirty, difficult and dangerous labor -- typically in sectors such as construction, manufacturing and agriculture.

But as the workers coming in through the system were managed as “trainees” and not as “workers,” the system was widely criticized both in Korea and overseas for human rights abuses, such as forced labor and confinement, the creation of a black market among agencies and poor working conditions.

“As I was a trainee, not a laborer, I was not entitled to any rights to change jobs, join a union or receive compensation for industrial accidents from the government,” Rai said, calling it a “modern form of slavery.”

Amid mounting criticism over the system, the liberal Roh Moo-hyun administration introduced a new migrant worker scheme called the Employment Permit System, to reduce the number of foreign laborers who stayed in Korea illegally.

Under the EPS, unskilled workers from 15 nations, mostly from Southeast and Central Asian countries, are allowed to enter Korea to work for up to three years if employers cannot find South Korean nationals to fill positions in manual labor.

“At least, migrant workers are recognized as laborers in accordance with Korea’s labor law under the new system,” Rai said, referring to workers’ basic rights to strike, organize and collectively bargain.

“But the EPS is still business-friendly, not laborer-friendly, with employers monopolizing all the rights to hire and fire migrant workers.”

For starters, the EPS laborers come here without knowing what their job is and who they will work for. Instead, only employers are given a list of job seekers from which they can choose.

While EPS employers have the right to dismiss migrants without justification, those employed under the scheme have no right to quit or change jobs without a release form signed by their employers. Foreign workers who quit without permission are labeled “runaways,” facing arrest or deportation.

“The employers have no legal duty to sign a release form for workers to change a job or renew their contracts to let them stay longer here,” Rai said, pinpointing the rules in the system that can lead to creating an “abusive” environment.

The EPS laborers, tied to their initial employers for three years, must leave Korea unless they extend their contracts. With little opportunity to make money at home, the migrant workers on the visa are coerced into putting up with exploitive conditions not to be fired, Rai noted.

The Korean government allows the workers to change jobs without approval from employers and receive overdue payment if they report the case to the Labor Ministry. But lack of fluency in Korean, complicated legal processes and fear of losing their jobs make it difficult for them to come forward.

While the United Nation’s International Labor Organization hailed Korea’s worker scheme as “a better conceived, funded and implemented foreigner worker program than most in Asia,” Amnesty International slammed the program for making migrant workers vulnerable to “abuse” and “exploitation” in its 2009 report.

Another complaint from migrant workers is a revised law, enacted last year, which requires employers to pay them the severance money after they leave Korea. The move is designed to deter migrant workers from overstaying their visas, according to the authorities.

The system gave more leeway to the employers to abuse the system and dodge their legal obligation to pay workers severance, according to Rai.

“The problem lies in the legal structure that forces migrant workers to keep quiet out of fear, but there is nothing we can do about the law aside from raising awareness of the issue,” Rai said, adding that the government is more responsible than employers for the situation.

The migrants’ union has called for a change to the current EPS system, asking the government to issue a “Labor Permit” instead.

“The proposed Labor Permit System would enable migrant laborers to choose and change jobs, invite their families and work here for longer than five years so that they can apply for permanent residence,” Rai explained.

Currently, the government only allows the EPS laborers to stay for up to four years and 10 months, which Rai views as a "gimmick" to stop them from applying for permanent residence. Those who have lived in Korea for at least five years can apply for residency.

Rai believes that the highest court’s ruling to legalize the MTU is not an end to its years-long fight, but only a new beginning.

Despite the ruling, the Ministry of Employment and Labor is yet to authorize its establishment, demanding several changes to its union rules. The ministry argued that the union’s bylaws included politically-oriented clauses opposing the Employment Permit System and calling for people working here illegally to be given visas.

Rep. Kweon Seong-dong of the ruling Saenuri Party recently enraged migrant workers by suggesting that foreign workers should not be entitled to the minimum wage. The wage hike will benefit them “excessively,” he said.

“I want to question the qualification of the lawmaker,” Rai said, lamenting that a lawmaker from a developed country like Korea could have such a backward perception.

Korean public sentiment remains divided over migrant workers, with many accusing them of stealing jobs from low-income Koreans.

But the MTU leader said foreign workers were “necessary” to support Korea’s export-driven economy amid the low birthrate and graying population. “There are already many factories that cannot operate without foreign laborers,” he said.

Throughout the interview, Rai stressed “solidarity” among Korean and foreign laborers against capitalists who are only after profits.

“Koreans and migrant workers are friends, not enemies,” he said. “We should join forces to fight against the employers and the government trying to reform the labor market (to make it flexible) for their sake.”

“If we work together, there is nothing we cannot do.”