One group, representing chauffeur service companies nationwide, protested against the company’s possible entry into a market that is crowded with smaller players, while the other group, representing their drivers, urged it to enter and solve the industry’s unfair treatment of drivers.

“It is true that we are working on the launch of a luxury limousine service. But no plans have been made about the chauffeur service. We are perplexed over the unexpected protests,” said a Daum Kakao spokesperson. 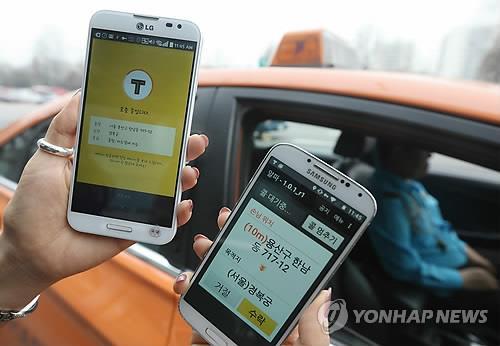 A passenger calls a taxi on the KakaoTaxi app. Yonhap
Calls for KakaoTaxi, launched in March, hit the 5 million mark early this month. The number of drivers reached 110,000, which compares with 250,000 taxis operating across the nation.

The huge success comes after U.S. tech firm Uber suspended its key ridesharing service in Korea due to resistance from local governments and taxi drivers.

Unlike Uber hiring amateur chauffeurs, KakaoTaxi teamed up with taxi drivers from the beginning, offering them the business platform for free of charge in a push to expand its service network in the early stage.

Instead, it has sought to earn profits from related new services and the chauffeur service is one of these ideas.

In Korea, binge drinking is part of daily life for office workers and the night culture has created a lucrative market for chauffeur services.

But Daum Kakao’s possible entry into the market is prompting concerns among existing firms, most of which are small and mid-sized firms.

“If Daum Kakao, equipped with its money and powerful IT platform, enters the market, that would pose a direct threat to our survival.”

“We hope Daum Kakao’s entry will pave the way for the whole industry to revamp drivers’ work environment, including unfair charging and insurance policies,” said a driver during the gathering.

Despite the earlier disputes, industry watchers predict the market for ride-sharing services to surge in the coming years, taking advantage of the nation’s high smartphone filtration and cheaper taxi fares.

Local firms, led by KakaoTaxi, are diversifying services to lure more customers. KakaoTaxi is also expected to use its mobile payment system KakaoPay for the taxi business in the near future.

Uber, which faces legal hurdles globally, is also said to be gauging the timing of its business expansion in Korea. The company currently operates UberBlack and UberTaxi services in the country.