[ The Korea Herald – Send E-mail ]
School reform, for better or for worse?
Efforts to diversify high school education end up reinforcing disparity
By 윤민식
Published : Jul 20, 2015 - 15:42
Updated : Jul 20, 2015 - 20:12
Last Thursday, the Seoul Metropolitan Office of Education said it would once again hold a public hearing for Seoul Foreign Language High School, after its decision to cancel the school’s designation as a special-purpose institution was derailed by the Education Ministry.

It was deemed as Seoul education chief Cho Hi-yeon’s last-ditch effort to avoid another fiasco like last year, when his attempt to strip eight so-called “elite schools” of their autonomous status sparked fierce protests from parents and the Education Ministry.

Both the autonomous private high schools and special-purpose high schools were introduced as a means to provide students different ways to study. But throughout the years, there has been criticism that these elite schools have transformed into cram schools preparing students for college admission.

“The competition-based education paradigm has been an engine for Korea’s rapid growth. But the system now is now so focused on ‘being the best’ that it is threatening the well-being of the community,” Cho said at a recent press conference. Since taking the helm, his emphasis has been to restore the competence of 1,520 regular high schools that have slumped to the position of second-rate education institutions. 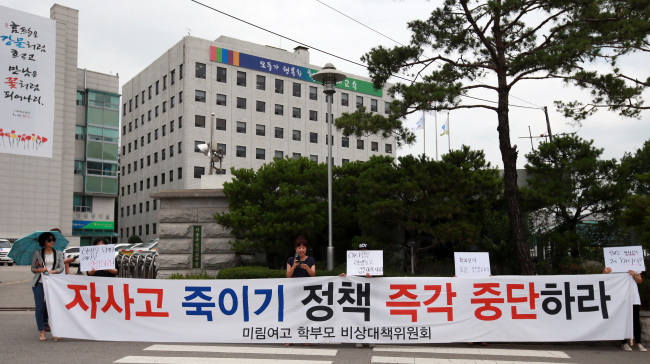 In Korea, there are 31 foreign language high schools and science schools, 26 science high schools, seven international schools and 49 autonomous private high schools. They are considered elite schools, as they are more proficient than regular schools in sending their graduates to top-tier universities.

These schools were not originally designed to establish a hierarchy over traditional high schools. On the contrary, the government has consistently attempted to abolish the high school pecking order since 1974, when it banned each school from conducting their own admission tests and stipulated that middle school graduates should be randomly distributed to high schools in their respective regions.

But releasing the junior high students from the pressures of high school admission tests had sparked criticism that the policy brought down the overall quality of the students’ academic ability.

In addition, there was growing disparity in academic achievements between students in the affluent southern Seoul area ― the so-called Gangnam School District 8 which includes Gangnam-gu and Seocho-gu ― and students elsewhere, as wealthy parents in Gangnam were able spend more on private education. The tutor-ban in the 1980s did little to rein in the private education frenzy; if anything, it only fueled it further.

By the 1980s, foreign language high schools began to pop up as part of the government’s push to foster students excelling in foreign languages. At their inception, only students with the lowest grades applied there.

In 1992, the government granted foreign language high schools and science high schools the status of “special-purpose high schools,” which gave them the right to hold admission processes of their own. This effectively allowed them to handpick students who exceled in classes. In 1996, Daewon Foreign Language High School became the first institution since the 1970s to send more than 200 of its graduates to Seoul National University, widely considered the top college in Korea.

Autonomous private high schools also started in pursuit of an ideal. Former President Lee Myung-bak believed competition was critical to improving students’ competence. In 2010, his administration introduced a school that granted more leeway than regular schools in creating it own curriculum.

In exchange, it received less in government subsidies, and made up for the lack of funding by charging parents about three times more in tuition fees.

The administration believed that by allowing autonomy, a diverse set of high school curriculums would come to exist. In reality, autonomous private high schools used their freedom to turn themselves into cram schools.

Local civic group World Without Worries About Private Education recently conducted a study on 44 of the country’s 49 autonomous schools. They found that 37 schools had more than half of their curriculum devoted to Korean, English and math ― the key subjects in the annual college entrance exam, the Suneung.

“Autonomous high schools are using their freedom to increase Suneung-related subjects. This is not diversity ― it only reinforces the current test-based system,” said an official from the group. 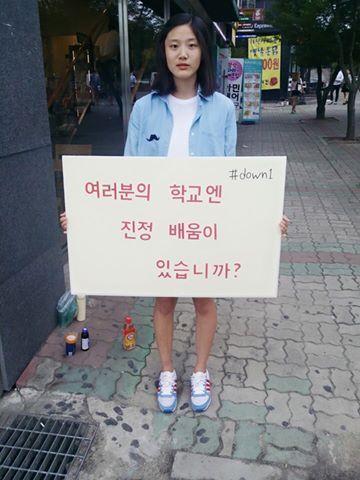 Over the decades, the government has launched a myriad of efforts to get rid of the system that is primarily focused on getting students to best universities and colleges, to no avail.

“They (the government) are barking up the wrong tree. They say they’re looking to add variety, yet the policies have only resulted in top-down variety,” said Hong Hoo-jo, a professor of education at Korea University.

He pointed out that the school systems introduced by past administrations have only resulted in establishing a new pecking order among high schools: special-purpose schools, autonomous private high schools form the elite group, while the regular high schools are at the bottom of the barrel.

Such classes do not officially exist. In reality, these de facto elite schools have a chance to recruit students with higher grades as their admission process starts earlier than those of regular schools.

Schools for students specializing in arts, sports and other specialized schools also hold their admission processes early, but these elite schools recruit students from the same pool as the regular high schools.

This allows the special-purpose schools to swoop in to collect all the top-ranking middle school students, and the leeway of curriculum allows them to further pursue education based on preparing for the Suneung. As a result, the students from these schools dominate college admissions.

According to the website Higher Education in Korea, 26.6 percent of SNU’s freshman students last year were graduates from special-purpose high schools. Korea Advanced Institute of Science and Technology picked 76.3 percent of their incoming class from these schools. 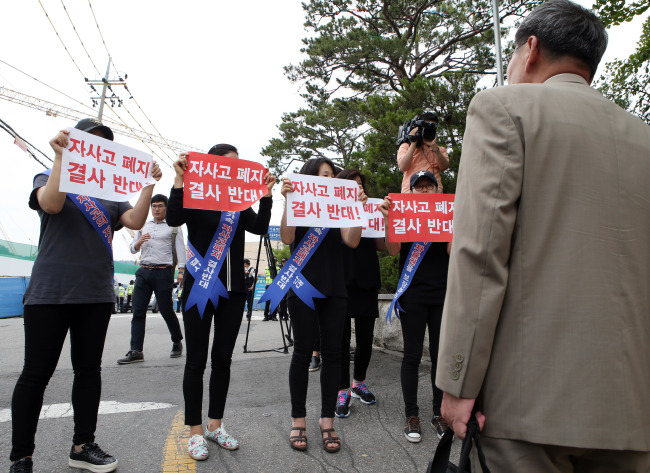 Parents of students attending autonomus private high schools block one of the school principals from attending the hearing held at Seoul Metropolitan Office of Education on July 7. (Yonhap)

Autonomous schools account for less than 3 percent of all schools, yet they account for 10.9 percent of freshmen in universities and colleges based in Seoul and Gyeonggi Province, which is generally harder to enter than schools in other regions.

The grades are not the only barrier separating the “elites” from regular students. The financial burden of attending autonomous schools prevents students from poorer families from attending them.

For some schools like Korean Minjok Leadership Academy, the combination of tuition fees, dormitory fees and other academic-related costs amount to over 20 million won ($17,400) a year, which is nearly double the yearly tuition fee for an average university here. The tuition fees alone are more than eight times higher than that of regular schools, which is about 1.8 million won.

While universities claim they try to conduct an admission process as fairly as possible, they cannot ignore the profound difference among schools. For example, a student at the top of the class of a regular high school is not recognized on the same level as one who aced the class in a special-purpose school.

“It is much easier to pick students based on their Suneung scores like before. The Education Ministry is leaving it up to us to evaluate competence of each school, which makes it harder for us,” said an official at the admissions department of a Seoul-based university. “I’d rather that they had few special-purpose schools for students who are really special. But it is nearly impossible to get rid of them once you’ve made them.”

This was well demonstrated last year, when the SMOE attempted to strip eight elite schools of their special status. After a period of controversy, the ministry revised the law so that local education offices could not revoke autonomous schools of their status without its consent.

Hong of Korea University said the inevitable trend of high schools turning into cram institutions hinders all attempts to diversify the education that the students deserve.

“The university admissions process is too simple. High school education is only an advanced course of what students learned in middle school, which saps the overall quality of Korean education,” he said. “There are various jobs, different fields of expertise in society. We should allow high school students to study subjects closely related to what they want to pursue in college and later on in their careers. That’s the only way we can achieve real diversity.”