Breaking weeks of political deadlock, Park met Saenuri chairman Kim Moo-sung and the members of new interparty leadership at her office, and called for the unity of her government and the party, reiterating that they had a shared destiny.

“We have to show ourselves ― the party, the government and Cheong Wa Dae ― uniting before the people to achieve economic prosperity and open a new era of hope for the people’s happiness,” said Park at the meeting.

“I hope that the new leadership of the governing party will play a crucial role in revitalizing the economy and for the success of national and political development.” 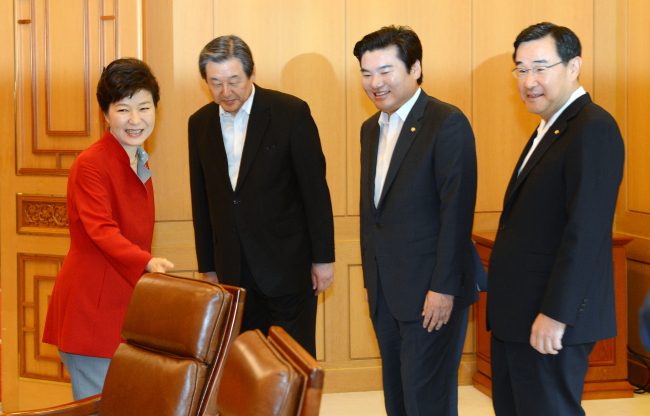 The Saenuri chief also vowed to fully cooperate with the Park administration, stressing that the party would be more responsible for the success of her reform drive.

Kim also requested Park exercise her clemency to release not only the people convicted of minor crimes, but also business leaders who have been put behind bars as part of efforts to revitalize the nation’s economy. The president said she would “officially” review the party’s request, Saenuri floor leader Rep. Won Yoo-chul told reporters after the meeting.

Park’s remark instantly raised speculation she would use her special authority to free business tycoons convicted of crimes for the first time. She has remained reluctant to do so until now.

Park said she would administer the law strictly and treat all criminal offenders equally upon her inauguration in early 2013. The president granting pardons to high-profile businessmen is still widely viewed as government favoritism to conglomerates.

But business circles have been calling for the release of key members of families that run conglomerates, saying keeping them in jail could delay the companies’ key operations.

On Monday, she has ordered her senior secretaries to review the scope and the criteria for pardons she is set to issue on Aug. 15 to mark the 70th anniversary of Korea’s independence from Japan’s 1910-45 colonial rule.

Park and Kim also vowed to reactivate a trilateral meeting among the government, Cheong Wa Dae and the Saenuri Party that has not been convened since May. They also agreed to work closely to pass a 22 trillion won ($19.2 billion) extra budget bill to revive the sluggish economy and support victims of the Middle East respiratory syndrome, Won said.

The president also accepted Kim’s request to hold a separate trilateral meeting with leaders of the ruling and the main opposition party.

Park also held a closed-door meeting with Kim for 20 minutes. Kim, however, said he would not release the details of the conversation he had with the president.

It was her first meeting with Saenuri leadership in five months, just three weeks after she blasted the party for bowing to the main opposition party’s demand to revise a controversial parliamentary law.

Calling former Saenuri whip Yoo Seong-min a traitor, Park pressured him to leave his post. Her harsh bombardment exposed a party feud between lawmakers loyal to Park and nonmainstream members who denounced her grip on the party.