[ The Korea Herald – Send E-mail ]
80% of N.K. defectors are female: data
By Shin Hyon-hee
Published : Jul 5, 2015 - 19:02
Updated : Jul 5, 2015 - 19:31
The proportion of North Korean defectors here who are female has steadily risen in recent years, topping 80 percent for the first time this year, government data showed Sunday, pointing to lighter surveillance of women than men amid a perceived tightening of overall border controls.

Of the 535 people who fled the North between January and May this year, 444 were women, accounting for nearly 83 percent, according to statistics from the Unification Ministry.

The figures marked the highest portion of women yet, though they were tentatively compiled while Seoul’s background checks continue on the newcomers and may fluctuate toward the end of the year, the ministry noted.

“The proportion of women stood at about 7 percent before 1989 but has since showed an upward drift, amounting to 35 percent in 1997 and 42 percent in 2000, and in 2002 exceeded that of men,” the ministry said on its official website. 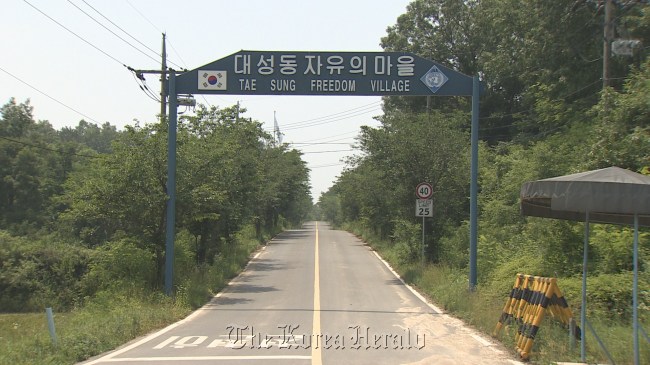 A sign points to the entrance of Daeseong-dong, the only civilian residential area within the southern part of the Demilitarized Zone. Yonhap
The trend came as North Korean leader Kim Jong-un has reportedly been stepping up border controls and penalties for those who were caught escaping in order to stem the flow of defectors since he took power in December 2011.

While the scrutiny became tougher for men with jobs in their towns, border regions or nearby China, housewives may have been able to take advantage of relatively loose surveillance, officials say.

The overall number of North Korean refugees continues to decline on the back of Pyongyang’s heightened border security.

Seoul has in recent years installed bells, phone boxes and guidance signs within the Demilitarized Zone to help ensure a safer cross-border journey for defectors, while facilitating those seeking to come to South Korea from a third country.

After their arrival here, refugees usually spend 12 weeks at a state-run resettlement center for cultural education, therapy, and career consultations and training. They also receive living, job, education support and other assistance from the government.