The Finance Ministry disclosed the expenditure plan designed to prop up the sagging economy as the Cabinet passed the supplementary budget proposal on Friday.

The 11.8 trillion won budget increase plan will be submitted to the National Assembly on Monday for final approval.

“The extra budget can revitalize the economy and stabilize the livelihoods of ordinary people who have been affected most by the fallout of the MERS outbreak and prevent a sharp drop in consumer spending,” said Vice Finance Minister Bang Moon-kyu. 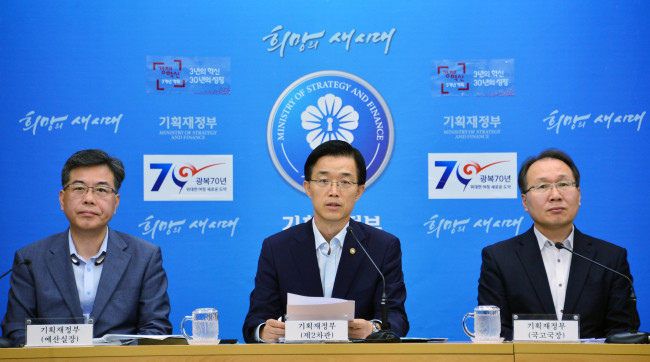 The government forecast the economy would grow 3.1 percent this year and 3.5 percent in 2016.

Ministry officials said that 5.6 trillion won of the extra budget would be used to make up for the tax revenue shortfalls caused by the sluggish economy, with 6.2 trillion won to go directly to helping people and businesses.

Financial support will be provided to hospitals and clinics so they can update their facilities to deal with contagious diseases in the future, with funds going to cover losses caused by a sharp drop in patients since June that is making it hard for some hospitals and clinics to stay afloat.

According to the proposal, the extra budget will be sourced from the 700 billion won surplus from the Bank of Korea, 1.5 trillion won from state institutional funds, and fresh issuance of treasuries worth 10 trillion won.

In response to concerns that the 10 trillion won in treasuries may seriously worsen the nation’s financial soundness, Bang said the move would “increase tax revenue in the mid- to long run, ultimately strengthening financial soundness.”

Separate from the supplementary budget, the government said it would aggressively encourage public companies to make large-scale investments, and by tapping into state-run funds, make it possible for 3.1 trillion won to be spent on creating growth opportunities.

Besides this, the government’s broad plan calls for increasing investments in local credit guarantee firms, insurers and credit agencies, which will nudge these institutions to provide up to 4.5 trillion won in fresh liquidity.

“Combined, the goal is to inject some 22 trillion won into the economy in the coming months,” Bang said.

The official said the extra budget along with additional funds could translate into some 124,000 new jobs being created overall, including some 66,000 for young people and 33,000 jobs for underprivileged senior citizens.

The latest move will push up central government debt 1.8 percentage points to 37.5 percent of the GDP, according to the ministry.

The supplementary budget is the 11th to be requested by the government since 2000. It comes on top of the 375.4 trillion won annual budget for 2015.