The event is in its third year, with 60 people coming to the first one and 225 to the second. Now the organizers are hoping to attract 500 people to this year’s event at the Gwangju Design Center from Sept. 19-20.

Alleycon general manager Jordan VanHartingsvelt said that he already had significant interest from outside the city, including people already planning their cosplay outfits.

“That’s exactly what we want to see. We want people to be excited from all across Korea,” he said.

To make it easier for people to come from afar, the event has now been spread over two days. VanHartingsvelt said this should also help reduce the number of event clashes so people could do more of what they want to do, although there are still scores of events over the two days. 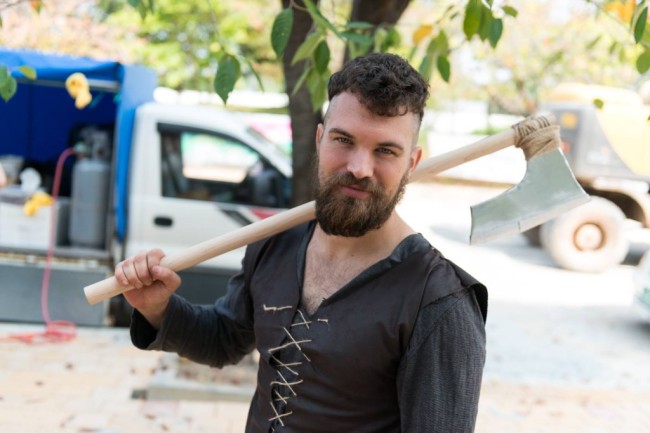 Alongside Magic the Gathering games, video game tournaments and debates, there will also be debates and tutorials by local experts on geek subjects, including on storytelling by comic book artist Ryan Estrada and on painting miniatures by Paul Starr.

JJ Billet will be hosting events using his Pay to Play Role-Playing Games (P2P RPG), in which players pay to play traditional tabletop games while onlookers can pay to intervene -- similar to sponsors in “The Hunger Games” -- to help or hinder the characters. The money taken is given to charity, in this case Gwangju’s Adopt a Child for Christmas campaign that buys Christmas gifts for orphanages.

The campaign is one of the two causes that proceeds from the event go toward, the other being the Michael Simning N’Dwara Scholarship Fund, which supports vocational education for young women in N’Dwara, Kenya.

Billet says he has already raised a total of 4 million won ($3,800) for the Christmas program through two charity events so far and will hold two more at Alleycon -- a streamed game on twitch.tv and a live tabletop game.

The Gwangju Performance Project will also be involved with “Make It Great in 48,” a 48-hour film challenge to be completed before the event. Films will be shown at the Gwangju International Center on Sept. 13 and again at Alleycon, where the audience will vote for a people’s choice award.

GPP president Heather Aitken said the group would also be running workshops including stage combat, cosplay and makeup, and stage “Apogee,” an original sci-fi romance written by local playwrights Rachel and Dave St. John, as well as other performances.

Cosplay is another big part of the fun. Vanhartigsvelt said most participants wore costumes for the first event, and about 80 did so for the second.

The variety of the activities is what marks the event out as a Western-style convention, VanHartingsvelt said, explaining that the events in Korea and Japan tend to focus on one or two areas -- such as comic books or animation.

He added that they tend to act more as networking and promotion events than forums for activities.

“What we are doing is providing a place for people to let loose, relax, engage with each other and just really enjoy these past times that are classified as typically geek,” he said.

Out-of-town guests who book in advance will have the option of asking the organizers to book accommodation near the venue.

Coupons for foreigner-friendly restaurants and bars such as Tequilaz and the First Alleyway -- where Alleycon began -- will be issued to attendees to help them save money and find their way around, and there will also be some icebreaker events, including a trivia night on Sept. 18 and a geek-themed open mic night on Sept. 19.

“Alleycon really shows Gwangju for what it is: the Geek Capital of South Korea,” said VanHartingsvelt. “We take pride in the title given by past Alleycon guests and hope it catches on!”