The 17 confirmed cases, which includes doctors, patients and visitors, caught the virus from the 14th confirmed MERS patient while sharing the hospital’s emergency room from May 27 to 29, according to the Samsung Medical Center. The hospital said it has placed more than 890 patients and medical staff possibly exposed to MERS by the 14th patient in quarantine.

“After reviewing medical records and CCTV footage to trace it, we found that 675 patients and 218 medical staff members were exposed to the virus by the 14th confirmed MERS patient,” said Song Jae-hoon, the director of the Samsung Medical Center, in a news briefing Sunday. 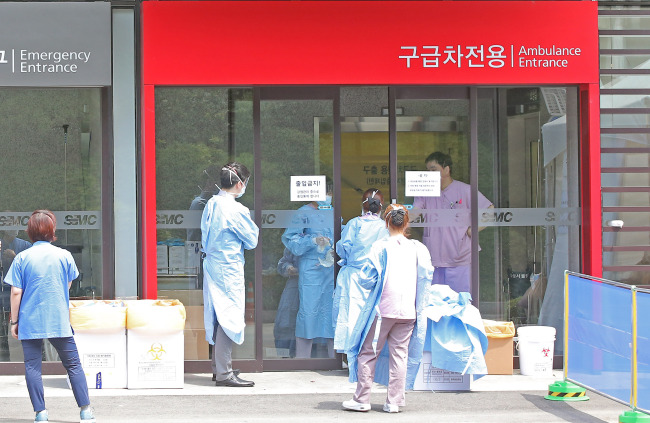 Medical staff members enter an emergency room at Samsung Medical Center in southeastern Seoul, where visitor access was restricted due to the MERS risk on Sunday. (Yonhap)
“We immediately informed the 893 people of the possible infection and placed them in quarantine,” Song said, after expressing a deep regret for causing concerns.

The explanation came some hours after the government reported the fifth death from MERS and confirmed 14 more cases of the disease, pushing the number of confirmed patients to 64. Of the newly confirmed patients, 10 caught the virus while staying at the Seoul-based hospital.

One of the confirmed patients placed in isolation is a doctor affiliated with Samsung Medical Center, who exposed over 1,500 Seoul residents to the deadly virus by attending large-scale events in southern Seoul on May 30 despite showing symptoms of the virus. The doctor, also identified as the 35th patient confirmed of MERS infection, then was treating an embolism patient who later was quarantined after being placed near the 14th patient at the facility.

While St. Mary’s Hospital in Pyeongtaek, Gyeonggi Province, has been cited as the first source of infection of MERS, with 36 confirmed patients originating from the facility, Samsung Medical Center comes second in terms of the number of the confirmed MERS cases as of Sunday afternoon.

Given that the 14th confirmed MERS patient checked in to the hospital on May 29 and the virus has an incubation period of two to 14 days, the number of patients confirmed of MERS is likely to further grow, experts said.

Samsung Medical Center is the nation’s first medical facility that detected a confirmed MERS case in Korea on May 20. It reported a 68-year-old patient, who traveled around the Middle East and showed symptoms for flu, to health authorities. He was later diagnosed with MERS.

The hospital’s initial response to the first confirmed MERS case was seen as successful, with no other patients from the hospital contracting the virus at the time.

“By promptly notifying those possibly exposed to the virus of possible infection, putting them in quarantine and monitoring their conditions, no patients at our hospital were infected by the first confirmed MERS patient,” Song said, stressing its proactive measures to combat the spread of the virus.

All 17 MERS cases that recently occurred at the Samsung Medical Center were infected by the 14th patient, who moved to the hospital on May 27 from Pyeongtaek-based medical facilities. He stayed at the hospital’s emergency room for three days until he was confirmed of the virus and transferred to the government-run facilities to be quarantined on May 30.

The announcement of new confirmed cases at Samsung Medical Center in southern Seoul, equipped with the nation’s best-trained medical staff, sparked fear that the deadly virus might have spread into the nation’s capital, a city of 10 million.

Dismissing the speculation, the chief doctor assured that MERS had not spread outside the hospital’s emergency room.

Meanwhile, an official at the hospital said it has no plans to transfer Samsung chairman Lee Kun-hee to his residence or another hospital. Lee, chairman of the nation’s largest conglomerate, has been receiving in-house treatment at the hospital since he suffered a heart attack about a year ago.

As of Sunday afternoon, some 2,361 people were under quarantine, with the Seoul Metropolitan Government separately monitoring more than 1,500 Seoul residents for possible infection.