Ham never thought she would see the propaganda leaflets on her doorstep as they were not frequently seen in cities as they were in the 1970s.

“I couldn’t believe they still communicated by sending airborne leaflets in 2008,” said Ham in an interview with The Korea Herald. 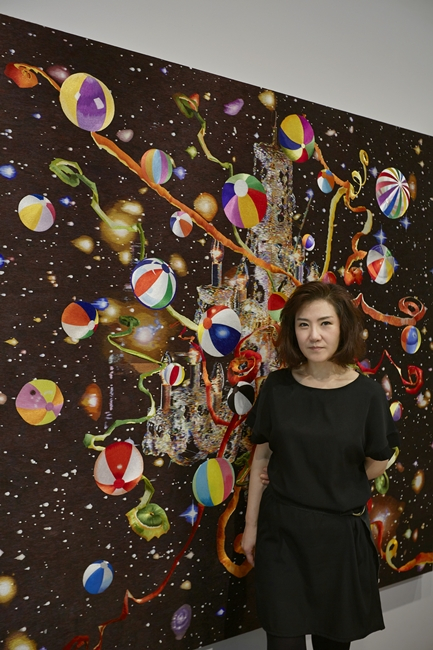 She drew sketches on cotton sheets and sent them with threads and instructions to a middleman in China. The materials are handed to North Korean workers who stitch embroidery on the cotton sheet in accordance with her instructions.

Ham says she is not the first person to have North Korean workers embroider. As fewer people in Korea hand embroider, people look for North Korean or Chinese workers who still hand stitch embroidery.

Many people have warned her it is one of the world’s most dangerous projects. No one’s safety is guaranteed here. If any North Korean worker involved in the process is found out by the North Korean authorities, he or she could get into huge trouble.

And it is a job that is completely out of her control.

“I can’t guarantee if I will ever retrieve my work. It could take more than a year. Some of my works are never returned,” said Ham.

She doesn’t know how many North Koreans are involved in the embroidery work, nor when she would get the work back.

She divides a single image into separate parts, which are embroidered by different North Korean workers. When she gets them back and puts them together, she finds each of them have different qualities, or color tones.

“Many things are out of my control. Sometimes each piece is in a different shade, as if they were done under different lights. Sometimes I am really surprised to find an amazing artistic quality that the North Korean workers expressed in my work,” she said.

The artist avoided giving too much detail on her project, as revealing too much may threaten the safety of those involved.

Her embroidered works of art consist of colorful, blurred images she digitally edited from real photos and random texts she collected from lyrics of South Korean pop songs or from the Internet. She is presenting her new works in Seoul six years after her last exhibition in the capital. The exhibition is being held at Kukje Gallery until July 5.

Her works have been featured more frequently in overseas exhibitions and biennales in London, Paris, Vienna, Bonn and China than in Korea.

The artist asks viewers to see “the unseen” in her beautiful, colorful embroidery works. She summed up the secret processes and emotions she went through in just a few words in a caption: “North Korean hand embroidery on silk, middleman, anxiety, censorship, wooden frame, 1,200 hours/2 people.”

“This project is uncomfortable and sensitive. But I’m not being political here. I think this is what I can do as an artist to leave an artistic footprint in this page of history,” she said.

She described her project as a love story in which a man and a woman never find the perfect timing to realize their true love.

“It feels like to me that all the circumstances and situations we (the North and the South) face are the factors that hinder two lovers to meet,” she said.

One of her new embroidery pieces on display features a phrase from South Korean singer Kim Jang-hoon’s old hit song “If you are like me.” The song is a monologue of a man who misses his lover after a breakup and tells her to come back if she shares the same feelings.

“If you are like me, feel what I feel” was the phrase she chose to send with her sketches to North Korean embroidery workers.