[ The Korea Herald – Send E-mail ]
[Herald Interview] KLM reaches Korean customers via KakaoTalk
By Korea Herald
Published : Jun 7, 2015 - 18:56
Updated : Jun 9, 2015 - 09:37
AMSTERDAM ― KLM Royal Dutch Airlines, known for its social savvy and service, is expanding its online presence to reach out to Korean customers with the launch of a KakaoTalk customer service account in a bid to “be where its customers are,” the airline’s e-commerce executive said.

“Replying in Korean on Korea’s most popular social media platform allows KLM to be in close interaction with its Korean customers,” Tjalling Smit, Air France KLM’s senior vice president of e-commerce, said during an interview at the airline’s headquarters in Amsterdam, the Netherlands. 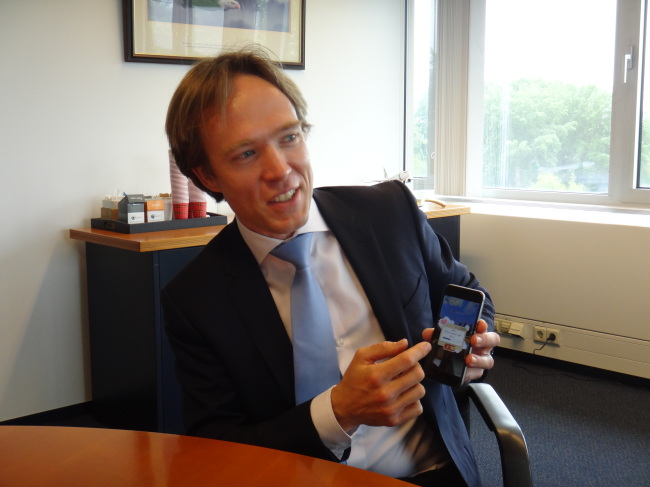 Tjalling Smit, senior vice president of e-commerce at Air France KLM, shows the company’s new mobile game, “Jets ― Flying Adventure,” on his smartphone at KLM’s headquarters in Amsterdam, the Netherlands. (KLM)
For Air France KLM, which merged into one group in 2004, Korea is the 16th-largest market by revenue out of some 100 countries and No. 3 market in Asia following China and Japan, according to Smit.

“With 11 connections between Europe and Korea weekly and 134 worldwide onward flights from Amsterdam Airport Schiphol, Korean passengers represent an important market for KLM,” he said.

“We believe in trial and error. In the fast-changing social media landscape, sometimes you have a big win, sometimes you don’t. But we’d like to take a risk,” Smit said.

“We believe that we can establish a one-to-one connection with our passengers and potential customers through digital media. That’s why we have to be where they are ― social media,” he said.

The carrier receives more than 70,000 mentions on social media a week, 4,500 of which are questions that are handled by some 150 service agents. It has a massive 9.1 million likes on Facebook and 1.7 million followers on Twitter.

Such customer-centric social effort has paid off.

The Dutch carrier generated 25 million euros ($28 million) in annual revenue through its social media channels in 2014, the year when KLM developed a system that allows customers to book a flight ticket and make payments via social media for the first time in aviation industry.

The innovation goes beyond social channels. The carrier created its own mobile games.

In May, KLM released its second mobile game, “Jets ― Flying Adventure,” in which KLM passengers receive an in-game reward when they get to their gate on time.

“By implementing the beacon functionality in ‘Jets,’ we created a unique link between ‘Jets’ as an entertainment game and the practical challenges of running an airline, like departing on time,” Smit said.