The webtoon market is estimated at 171.9 billion won, according to the first state-sponsored report on the cartoon industry compiled by the Ministry of Culture, Sports and Tourism and state-run Korea Creative Content Agency.
Experts cited diverse genres and engaging plots, aided by the massive adoption of smartphones and other mobile gadgets behind the impressive growth of the market. 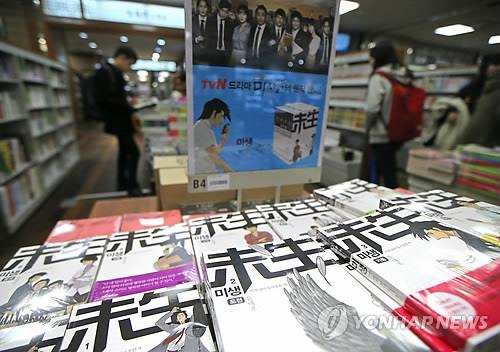 Coming book series "Misaeng" displayed at the local bookstore (Yonhap)
Encouraged by its expansion, a growing number of Korean start-ups are seeking to tap the fast-growing webtoon content.

According to the report, popular webtoon artists make more than 5 million won ($4,495) per episode. Some successful artists earn additional advertisement fees, while racking up profits from related merchandise.

Many of the webtoons were made into dramas and movies in recent years, including the recent hit “Misaeng,” which is based on an eponymous webtoon by cartoonist Yoon Tae-ho about the office life of a fictional trading company. The 16-episode cable drama enjoyed great success in 2014, garnering 10.3 percent viewers rate, a rare feat for a cable drama.

Also “Secretly, Greatly,” “Moss,” and “26 Years” are box-office hit movies in the past that were originally based on webtoon series.

A total of 74 webtoons made copyright contracts with TV and movie producers last year alone. Fifty of them are yet to be produced.

Webtoons are distributed through 28 platforms, including Naver and Daum, the country’s largest portal sites. As of today, there are 4,661 webtoon artists and 4,440 on-going webtoons published.