[ The Korea Herald – Send E-mail ]
Opposition pledges to uphold new Assembly powers
By Yeo Jun-suk
Published : Jun 2, 2015 - 20:54
Updated : Jun 2, 2015 - 20:54
The main opposition party vowed Tuesday to push through the revised parliamentary rule empowering lawmakers to demand amendments to government ordinances. It also released a list of 14 government decrees that it claimed were inconsistent with upper laws, pledging to take issue with them in a blunt rebuttal against President Park Geun-hye’s threat to veto the new parliamentary powers the day before.

The New Politics Alliance for Democracy asserted that the legislature has the “legitimate” authority to demand changes to the executive’s enforcement decrees, refuting Park’s argument that the bill would “paralyze” the government’s activity.

The move was expected to escalate the tension between the National Assembly and Cheong Wa Dae in the lead-up to upcoming parliamentary session.

Park said Monday that she would reject the bill unless the assembly revised the bill. The rival parties passed the bill last Friday after reaching a bipartisan agreement. 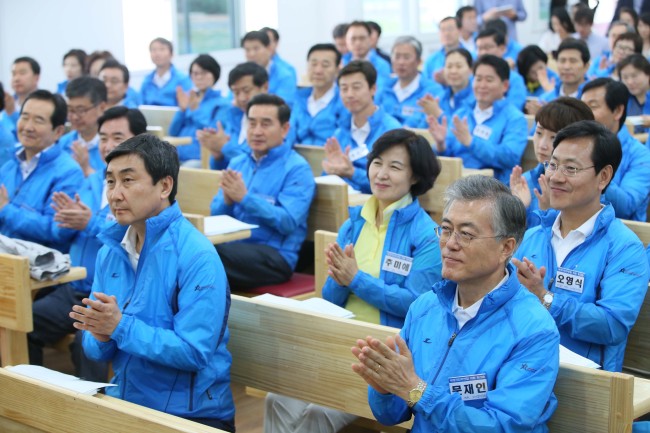 Members of the New Politics Alliance for Democracy including chairman Rep. Moon Jae-in (front, right) attend a party lawmakers workshop in Yangpyeong, Gyeonggi Province, Tuesday. (Yonhap)
“The president doesn’t need to make a fuss out of (the bill),” said NPAD floor leader Lee Jong-kul on Tuesday. “The National Assembly has the mechanism to verify whether the bill is right or wrong. I urge the president to trust the Assembly, so that it can do its job,” he added.

On Monday, the NPAD said that it would seek changes to a total of 14 government decrees that they said undermined the legislature’s efforts by falling short of serving their intended purposes.

Among them are decrees for the special Sewol law, child care subsidies and compensation for victims of the Gwangju democratic movement. The NPAD has claimed the government used the decree to bypass the law.

“Those are examples of the government violation of upper laws,” said NPAD Rep. Kang Gi-jung on Monday. “If the president vetoes (the revised assembly law), it would violate democracy and reflect her views that the executive branch is beyond the Constitution,” said Kang.

The ruling Saenuri Party, for its part, downplayed the forcibleness of the revised parliamentary rule, saying the government does not have an obligation to abide by the Assembly’s demand. The party pointed out the law lacks specific clauses to force the government to accept the amendments suggested by the lawmakers.

“(The NPAD)’s rationale is a bit exaggerated,” said Rep. Chang Yoon-seok of Saenuri Party. “It is a critical issue as to whether a branch can force other branches to do something and, thus, the law should spell it out in specifics. Obviously, the law does not spell it out, so the NPAD is interpreting the law in its favor,” said Chang.

The revision to the Assembly Law’s Clause 2 of Article 98 stipulates that the parliament can demand a revision or change to an enforcement ordinance and the head of the relevant ministry must “handle” the demand and report back with the result. Previously it had stated that in cases where an ordinance is deemed to conflict with a higher law, the parliament could notify the head of the relevant ministry.

Meanwhile, the NPAD on Tuesday held a workshop to review the causes of their crushing defeat in the April by-election and discuss action plans for this month’s parliamentary session.

“We attained our goals at the last parliamentary session,” said NPAD Chairman Rep. Moon Jae-in. “We have come up with a measure to address wrongdoings such as a decree for the Sewol bill. I am confident that we will achieve the same result in the next session,” said Moon.