Burkhalter, who is a federal councilor in Switzerland’s foreign ministry, came to Korea to participate in the 2015 OSCE-Asian Conference in Seoul on Monday. The minister said he aims to learn more about security issues in Korea and Asia at the conference that is now an established part of the cooperation framework on the changing global security environment. Switzerland is chairing the Asian Contact Group of the Organization for Security and Cooperation in Europe. 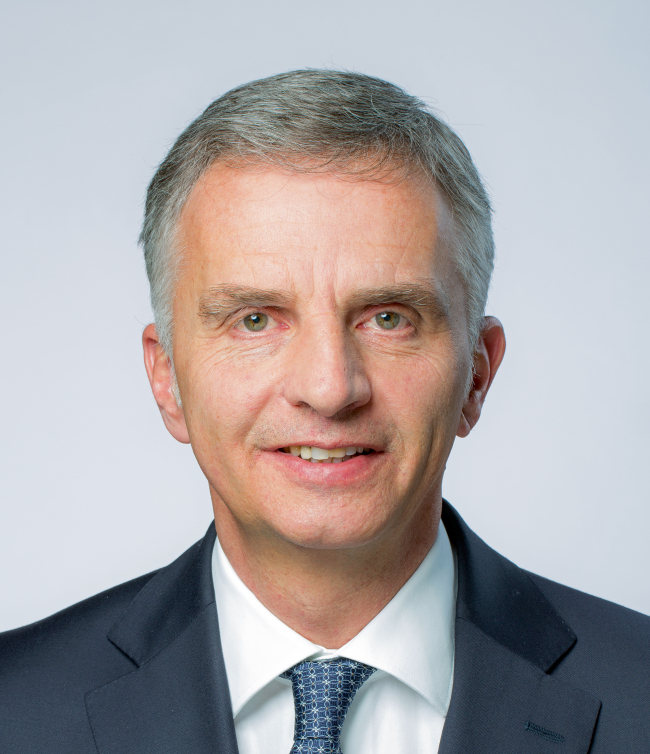 Swiss Foreign Minister Didier Burkhalter. (Yonhap)
As the security cooperation between Asia and Europe deepens, encompassing a wide range of areas from military to economic, environmental and social areas, Seoul and Bern should lead the forefront of international efforts in promoting human rights and development, he said.

The following is the transcript of the interview with Burkhalter.

Korea Herald: What institutional cooperation exists between Europe and Asia in security areas? What role has Korea played in international security as OSCE’s partner since 1994?

Burkhalter: Korea is a long-standing and active OSCE partner along with Japan. In 1994, Korea was invited to the Budapest Review Conference and CSCE Summit. In 1995, the term “partners for cooperation” was used for the first time to refer to Japan and Korea.

Over the years, Korea has made substantial contributions to the Partnership Fund and OSCE projects. Korea has significantly contributed to the OSCE’s Office in Tajikistan’s Mine Action and Border Patrolling project, as well as election initiatives in Afghanistan. It has seconded experts to several election observation missions in Europe and Central Asia.

It is important to remember that it was then-Foreign Minister Ban Ki-moon who chaired a meeting of Asian Partners at the OSCE Ministerial Council 2005 in Ljubljana to enhance mutual understanding of changes in Europe and Asia. Korea recommended specific ways to strengthen consultation between the OSCE and its Asian partners.

KH: Many diplomats and academics have pointed out the ineffectiveness of the six-party talks on denuclearizing North Korea. What are the fundamental problems within the institution based on your expertise? What wisdom can organizations like the OSCE bring to this issue based on the Cold War legacy?

The Helsinki Final Act was revolutionary in the 1970s as it showed that leaders with profound ideological differences could sit together and engage in a dialogue. In doing so, they laid out foundations for a Pan-European order. The idea was not to expand respective alliances, but to build a common security architecture.

A central legacy of Helsinki remains the OSCE’s comprehensive approach to security, which encompasses the politico-military, economic and environmental, and human dimensions. The balance between them resulted from an intensive negotiation process, and led to an agreement on the Commission on Security and Cooperation in Europe. All parties had adequate space for their own priorities and engagement.

KH: How can the international financial coalition help fight the spread of terrorism, money laundering and arms sales, particularly those involving North Korea?

Burkhalter: Switzerland has fully implemented the U.N. sanctions against North Korea since 2006, which have targeted arms sales, money laundering and terrorism financing. Switzerland is an active member in the Financial Action Task Force, which prohibits these activities.

The FATF currently calls on its members and jurisdictions to advise their financial institutions to give special attention to business relationships and transactions with North Korea. In addition to enhanced scrutiny, the FATF works to apply countermeasures to protect their financial sectors from risks emanating from North Korea.

KH: Academics and scientists have pointed out the interrelations between civil nuclear energy and the military, with the former being the foundation for military technologies. Given the rise of renewable energy sources and the tremendous cost and irreparable danger that nuclear operations pose, what can you say about the state of the civil nuclear industry as the world moves toward sustainable development?

Burkhalter: In 2011, the Swiss government decided not to replace our existing nuclear power plants after the end of their safe operational lifespan and we thus plan to gradually phase out nuclear energy. The Swiss Federal Nuclear Safety Inspectorate is continuously assessing the safety of our nuclear power plants and makes decisions to continuously improve it through systematic and periodic reviews.

The Fukushima nuclear accident also demonstrated the need for better international measures to prevent future catastrophes. Switzerland has adopted a national action plan to implement lessons learned from Fukushima and we are reviewing and updating the action plan annually.

Internationally, Switzerland has proposed an amendment to strengthen the Convention on Nuclear Safety to improve the safety of new and existing nuclear power plants. The Diplomatic Conference in Vienna last year has demonstrated that political awareness on nuclear safety still needs to be heightened internationally.

KH: Why has Switzerland adopted a position against the death penalty? What larger social and institutional changes are needed to accompany changes in the penal system?

Burkhalter: Switzerland’s pro-abolitionist stance dates back to its own abolition experience, which started in 1938 with abolition for ordinary crimes and was completed in 1992 with abolition for military crimes. Our engagement in favor of universal abolition is based on the firm conviction that capital punishment does not deter crime any more so than long prison sentences.

The use of violence for the purpose of justice questions the very foundation of a rules-based country, committed to protecting the most basic of all human rights, i.e. the right to life. As long as the death penalty exists, innocent people can be put to death, be it due to judicial or other errors. Over 100 countries have completely abolished capital punishment, around 50 others, including Korea, have a moratorium on executions.

By abolishing the death penalty, the Republic of Korea would further strengthen the positive role it plays in international human rights forums. Korea can be the first Northeast Asian country to achieve the death penalty abolition.

KH: Many international organizations have failed to prevent the reckless killing of civilians in Ukraine, Gaza, Syria, Nigeria, Yemen and many parts of Africa. Based on Switzerland’s position of “neutrality,” what can you say about these manmade atrocities?

Burkhalter: In the globalized world of today, effective multilateralism is more important than ever. The majority of the security policy challenges we now face are transnational in nature. The numerous crises currently occupying the international community can only be resolved through dialogue and concerted action.

In a global context marked by a changing balance of power and a growing number of major players, the attempt to reach a consensus for the resolution of problems can often be a challenging undertaking. Countries like Switzerland, whose credibility enables them to build bridges between the various sides, can in many cases play a major role. They contribute to rendering possible multilateral solutions even in a multipolar world.