The third step of the clinical trial, which will be led by Jazz Pharmaceuticals, U.S. drugmaker and SK Biopharmaceuticals’ partner, will take place in the U.S. and Europe with patients suffering from narcolepsy and sleep apnea, the Korean company said.

The Korean drugmaker exported the global license of the drug, which was recognized for its high effectiveness and safety, to the U.S. partner in 2011. 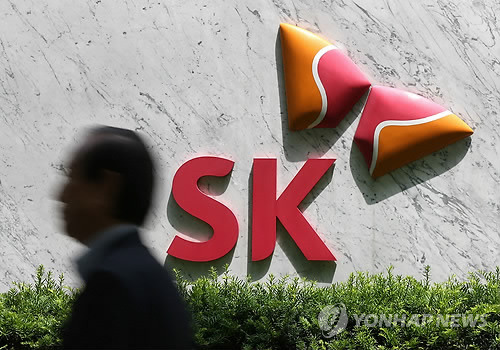 A man walks past the headquarters of SK Group in central Seoul. (Yonhap)
Jazz Pharmaceuticals plans to win sales approval from the Food and Drug Administration in the U.S. after completing the trial tests by 2017.

SK Holdings has been ramping up its efforts to grow biotech businesses for years, which will be the company’s new cash cow along with those for telecommunications, semiconductors and petrochemicals.

The holding firm of the nation’s third-largest conglomerate also established SK Biotech, a manufacturer of raw materials for medicine, in April.

An official from the Korean biotech company said SK would receive royalties during the clinical trials from the U.S. pharmaceutical firm and after the drug goes on sale.

With sales rights for the new medication in 12 Asian countries including China, Japan and Korea, SK also plans to conduct marketing promotions in the Asian markets.

Around 15 percent of those living in the West experience severe daytime sleepiness more than three times a week due to lethargy and sleep apnea.