[ The Korea Herald – Send E-mail ]
[Herald Interview] ‘N.K. may not put nukes on sub missile'
By Korea Herald
Published : May 22, 2015 - 18:41
Updated : May 22, 2015 - 18:41
JEJUDO ISLAND ― North Korea may not place a nuclear warhead on a submarine-launched ballistic missile, as the underwater launch goes against the principle that only its supreme leader has “central control” of its nuclear arsenal, a U.S. scholar claimed Friday.

Peter Hayes, executive director of the U.S.-based Nautilus Institute for Security and Sustainability, noted that the North’s underwater platform does not have stable means for communication, making it difficult for its ruler Kim Jong-un to give his direct order for the missile launch.

“The last thing that Kim Jong-un is going to do is to pre-delegate authority to launch a nuclear weapon from a submarine, with which he has no assured connectivity or communications and control,” he told The Korea Herald on the sidelines of the 10th Jeju Forum for Peace and Prosperity.

“So in my view, even if they had an operating SLBM, they wouldn’t actually mount a warhead on it, because this would directly contradict the principle of personal and central control of nuclear weapons by the supreme leader.” 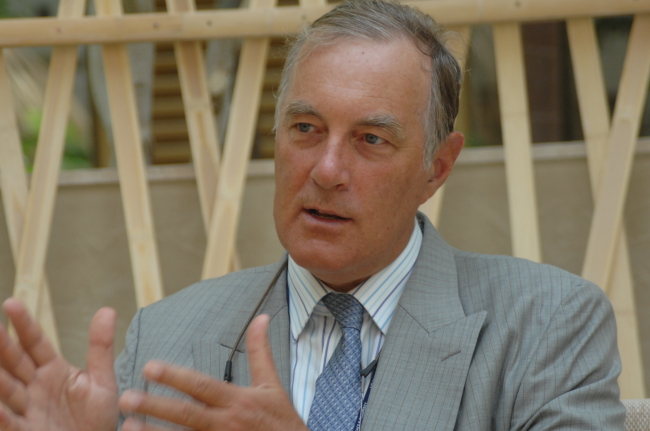 Peter Hayes (Jeju Forum)
Pointing out that the North is still far from completing the “extremely demanding” process of developing the SLBM, the scholar said the North is likely to use “hidden cave-based missiles” rather than a submarine-based launcher.

“I think it is highly likely that they will use ‘hidden cave-based popup’ short-range, medium-range and even long-range missiles once they gain that capability,” he said. “Again, they are very far from having the capability for loading a warhead even on an intermediate-range missile.”

Security concerns over the North’s nuclear arms have escalated since Pyongyang claimed earlier this month that it succeeded in conducting an underwater test of an SLBM.

Seoul officials said it would take at least four to five years for the North to develop and deploy a nuclear-capable SLBM, which observers worry would enable the unpredictable regime to secure a “second-strike” capability to launch a retaliatory counterstrike if it suffers a “first strike.”

Touching on Kim’s recent executions of senior officials including Hyon Yong-chol, the former chief of North Korea’s People’s Armed Forces, he said the executions could be part of his efforts to consolidate his power.

“There is nothing more extreme in the way he dealt with potential problems in that command structure. The central difference is that he is confident enough to make the executions a matter of public viewing to the whole world,” he said.

“I don’t think it shows he is in some sense crazy or has lost control. Just the opposite ― he is clearly, systematically consolidating his control and intends to use his command presence in a fairly forceful manner.”

Commenting on Seoul’s diplomacy at the time of escalating Sino-U.S. competition, Hayes said being in the middle between the U.S. and China is “not a bad thing.” He said Seoul could utilize the major-power relationship to enhance its strategic interests.

“You can play the two sides off against each other to your advantage. If you, as a middle power, use your locational position, you can then actually shape Chinese and America’s response, and approaches to North Korea,” he said.