[ The Korea Herald – Send E-mail ]
‘Education should make children happier’
By Yoon Min-sik
Published : May 21, 2015 - 19:36
Updated : May 21, 2015 - 19:36
Kailash Satyarthi, cowinner of the 2014 Nobel Peace Prize, urged South Korea to direct its education toward making children happier and cultivating openness to the world and devotion to the community.

South Korea’s high-quality education has been credited for the country’s economic surge but has done little for its students’ happiness, the Indian activist against child labor said.

“Education systems everywhere, including Korea, have to be more child-friendly. It should be easy and friendly for young people to approach,” he said during a joint interview at the World Education Forum 2015. In 2014, he won the Nobel Peace Prize alongside education activist Malala Yousafzai. 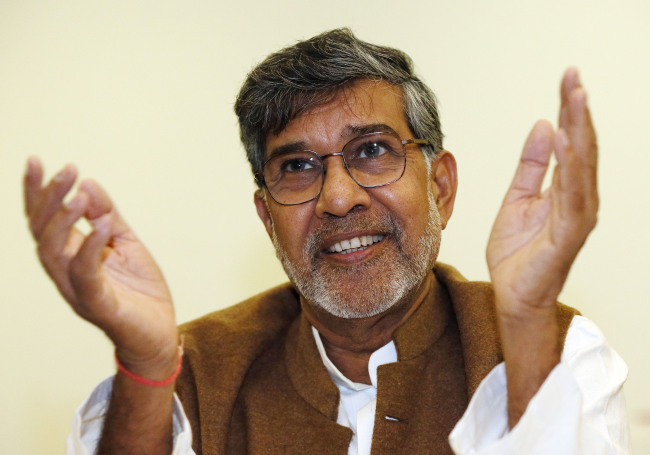 Kailash Satyarthi. (Yonhap)
The 61-year-old advocate of children’s rights started Bachpan Bachao Andolan (Save the Childhood Movement) in 1980 to end child abuses such as forced labor and human trafficking while working to promote education for all children. To date, it has helped over 80,000 children.

The Korean education system has been long associated with its rapid economic development in the latter half of the 20th century. The WEF 2015 had an entire special session devoted to its “success story.” But Satyarthi stressed that economic prosperity does not automatically bring happiness.

“(Koreans) are gaining from all over the world. Electronic goods, telephones. ... It is a brand. Everybody is using (Korean products). But more important is how you return this to the rest of the world,” he said.

Despite some outsiders ― most notably U.S. President Barack Obama ― praising the Korean education system, the students are often burdened with high academic pressure, depriving them of happiness.

The happiness index of Korean students was 19th among members of the Organization for Economic Cooperation and Development, according to a May report by the Korea Bang Jeong Hwan Foundation and Yonsei University. Korean students gave their lives a score of 90.4 points, which is an improvement from 60~70 points in the past but is still lower than the OECD average of 100.

This, Satyarthi pointed out, is hindering the true purpose of education.

“The objective of education is basically to discover the human quality and potential of every single human being, community, and the entire world. Eventually this potential should be transmitted to the betterment of the world. Helping each other,” he said.

“Many countries are poor but happy. Their social connectivity is high, which gives them a sense of security and cooperation. They are closer to each other and more open to each other,” he said.

This is the key for children to achieve happiness, he explained.

“A very simple thing that one can ask is, what I can do to make others happy? What did I do to make new friends? If you try to make a friend, an unknown person happy each week, it will make you happy every week,” he said.

He warned of possible side effects from excessive competition, a pitfall that many Korean students ― in their high-pressure environment ― fall into.

To raise their happiness levels, he encouraged Korean children to connect with the rest of the world’s children and learn about them.

“They (Korean children) should not be confined to themselves, but they should be open and break the solidarity. Go out, you are the hopes for the world. Identify yourself and play a role for the world.”