[ The Korea Herald – Send E-mail ]
[Herald Interview] The art and science of translation
Two young Indian translators aim to spread Korean literature to English-speaking readers
By Korea Herald
Published : May 18, 2015 - 18:37
Updated : May 29, 2015 - 09:15
On each desk are two copies of a text, one in Korean and the other in English. A handful of students ― some Korean, some international ― pore over each word, comparing and searching. A heated discussion ensues on the English translation of the Korean word “gap gap ha da,” as some favor “suffocating,” while others, “tedious.” A conclusion is difficult to reach, since the word could mean either of the two, or both, or even neither, depending on the context.

Thus goes a typical class at the Literature Translation Institute of Korea’s translation academy. The process of translating a literary text is an arduous one, especially if the languages involved are as dissimilar as Korean and English. But two young Indian translators have dived into the endeavor.

Agnel Joseph, a graduate of the academy and the first foreign staff member at the state-run LTI Korea, says that in many ways, translation is mathematical ― “like working out an equation, or fitting pieces into a jigsaw puzzle.”

But in many more ways, he adds, translation is an art, requiring an acute sensitivity to not only the languages involved, but also the culture of the readers.

“It’s more than a word-to-word conversion,” said Joseph. “It’s about passing on the feeling of the original text.” 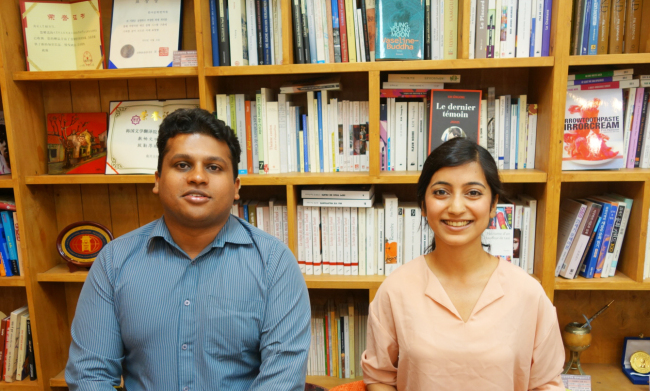 Agnel Joseph (left) and Reetika Dutta, two Indian translators who translate Korean literature into English, at the Literature Translation Institute of Korea in Seoul. (Rumy Doo/The Korea Herald)
While growing up in India, Joseph developed an interest in East Asian cultures through his uncle, a professor of Japanese studies, and decided to major in Korean studies at New Delhi’s Jawaharlal Nehru University. There, he first encountered Korean short fiction with Ha Seong-ran’s “A Woman Next Door,” and soon came to love writers like Park Min-kyu, Eun Hee-kyung and Yi Sang.

A good translation, he says, is one that reads naturally, while retaining as much of the “Korean essence” as possible.

Reetika Dutta, who is wrapping up her one-year program at the academy, agrees. Also a graduate of JNU’s Center for Korean Studies, Dutta was drawn to the idea of delivering “the spirit of a language” through an exact yet nuanced translation.

“In class, we are always told to stay close to the original text,” said Dutta. “We really respect the authors.”

At the same time, a literal translation rarely suffices.

“Simply sticking to the text is one of the easiest and worst things you can do as a translator,” Joseph added. “It robs the reader of the joy of reading, of that feeling of connecting.”

Translating literature, therefore, presents a conundrum between being verbatim and delivering a feeling, they said. How, then, does one fully straddle the two languages, the two cultures?

“That’s why we take classes on Korean culture, and try to immerse ourselves in everyday life here,” Dutta explained.

Alongside translation programs in English, French, German, Spanish and Russian, the academy also provides courses on Korean literature and its history. Often, classes turn into an interactive hub of discussion, breeding a sense of community among students.

“It’s great, because translating can be a lonely job. You’re basically sitting alone in front of a screen with a book,” said Joseph. “But when you’re in a group of people from different English-language cultures, all passionate about their work, you come out of your shell. Their feedback made me more conscious, more sensitive to my word choices.”

“It’s been the most enriching experience in terms of education,” said Dutta.

Being Indian has also helped the two young translators gain an advantage.

“In India, we’re always moving between at least two languages in our daily lives,” said Joseph, explaining the country’s many regional languages in addition to English and Hindi.

“And being a fellow Asian country, India shares many of the same cultural traits and emotional backgrounds as Korea. I think that helps me act as a bridge to the international audience.”

The most frustrating thing, they say, is when a translator knows what the text means, but cannot find the exact word that corresponds in the English language. A tortuous process then follows. “You work through all of your choices, one by one,” Joseph said.

“But when you find that exact word” ― that rare English word that both captures the nuance of the Korean text and does not veer too far from its literal meaning ― “it’s elating,” said Dutta.